'All of this is happening because Moldova's chief oligarch Vlad Plahotniuc usurped the country,' opposition leader says 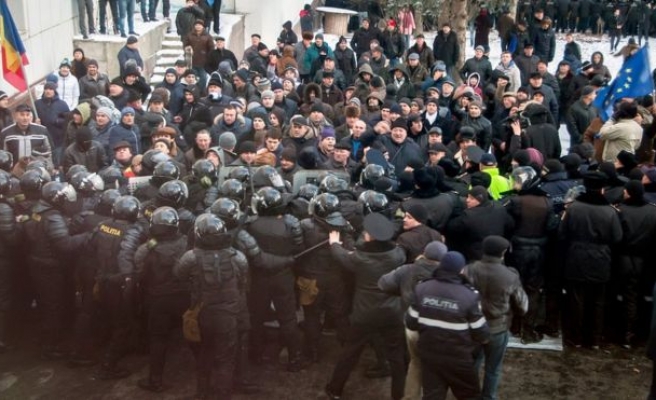 Some 10,000 people massed in the Moldovan capital Chisinau on Thursday as tensions in the pro-Western nation flared following the secret midnight swearing-in of a new government.

Lawmakers of the impoverished former Soviet republic on Wednesday approved a new government amid political turmoil, with protestors storming the parliament building and opposition legislators attempting to block the vote.

The swearing-in of the new cabinet has exacerbated tensions over alleged high-level corruption in the country of 3.5 million wedged between Ukraine and Romania.

Opposition protesters marched along the capital's main avenues in sub-zero temperatures and rallied in front of the parliament building, which was cordoned off by a police cordon which was six rows deep.

Clutching state flags, protesters urged the authorities to hold snap elections as they chanted "down with the government" and "down with parliament."

"All of this is happening because Moldova's chief oligarch Vlad Plahotniuc usurped the country," he said, referring to one of the targets of the protests.

Plahotniuc is one of the country's richest men, and is accused of using his fortune to meddle in politics.

"Down with thieves and the illegal government!" he said.

Security has been tightened to prevent a repeat of Wednesday's clashes.

Moldova has been locked in political crisis over a $1-billion (910-million-euro) corruption scandal that triggered mass demonstrations and the arrest of Vlad Filat, who served as prime minister from 2009 to 2013.

President Nicolae Timofti has endorsed the new government despite the rallies.

"I hope that this government, formed following a long period of political instability and the government's temporary fulfilment of its obligations, can competently and skillfully govern in this difficult situation," Timofti said in a statement after the swearing-in ceremony.

Several dozen protestors on Wednesday broke through police lines and into the parliament building after the government was chosen, while police threw smoke grenades and used batons to try to disperse the demonstrators.

Authorities said that 31 people -- including 27 police -- had been injured in the clashes.

Eleven of them were hospitalised.

In a sign of the tense atmosphere, Vlad Turcanu, the spokesman for the Moldovan president, resigned after claiming he had mistakenly told reporters the swearing-in of the government had been postponed by a day.

Kremlin spokesman Dmitry Peskov on Thursday urged all sides to respect the law and renounce violence.

In a statement released on Wednesday night, the US embassy in Moldova urged all sides to "refrain from acts that encourage or provoke violence" and called on authorities to immediately address demonstrators' concerns.

The last government, which was also pro-EU, lost a parliamentary confidence vote in October and was dismissed.

Since then the parliament has been deadlocked over its replacement.

In 2014, the government signed a historic EU association agreement despite bitter opposition from former master Russia.

Around 78 percent of Moldova's population is ethnic Romanian, while Ukrainians and Russians account for around 14 percent.