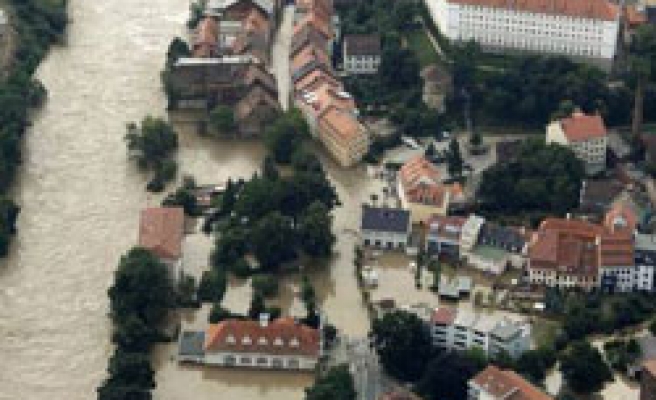 Rescue workers sought to clear flood-borne debris including damaged cars and evacuate victims after heavy rains and stormy winds across central Europe killed at least 15 people over the weekend.

Heavy downpours on Saturday caused rivers to overflow their banks and a dam to burst, submerging Bogatynia and other towns in the southwest corner of Poland and killing at least three people, Polish officials said on Sunday.

One woman drowned in Bogatynia on Saturday. The body of another woman and a 55-year-old rescuer swept away by a dam burst on Saturday were found on Sunday, Fire Brigade spokesman Pawel Fratczak told Reuters by telephone.

Flood damage and deaths also were reported in neighbouring countries. The death toll in the Czech Republic grew to five on Sunday and another three were missing and feared drowned, the Polish PAP news agency said.

On Saturday, three people died in the German town of Neukirchen, near the Czech border.

In neighbouring Lithuania, falling trees and structures killed four and injured several, with thousands being left without electricity after storm winds hit the country on Sunday, the rescue service said.

A 22-year-old woman died while camping in southern Lithuania when a tree fell on her tent, the daily Lietuvos Rytas newspaper reported on its website.

News channel TVN24 reported Prime Minister Donald Tusk pledging financial aid to the flood victims identical to that offered to those who suffered during this May and June floods.

Weather officials told TVN24 that the violent downpour caused the Miedzianka to overflow its banks.

The waters submerged most of Bogatynia before flowing into the Nysa, the border river between Poland and Germany, swelling further because of a burst reservoir dam.

Meteorologists in Poland do not forecast further heavy downpours.

In Germany, authorities at the weekend evacuated some 1,400 people around the town of Goerlitz, on the border with Poland, where they expected the flooding level to rise after topping 7 metres (23 feet).

In the Czech Republic, extra rescue personnel and soldiers were called in to help with evacuation from some of the worst affected towns in the north of the country, and helicopters were used to reach villages cut off by the swollen rivers.

Thousands of residents in northern Czech Republic remained without electricity and gas on Sunday.

President Vaclav Klaus is expected to visit the region later on Sunday and the government will meet on Monday to discuss releasing emergency funds to help in clean-up efforts.

While the rains had eased by early Sunday afternoon and river levels were falling, many Czech villages were cut off, trains were not running and the muddy conditions made it difficult to get trucks and rescue personnel to the hardest-hit areas to deliver assistance.

Storms and high winds left several regions in eastern Slovakia with no electricity on Saturday, but no major damage, casualties or injuries were reported.