The Labour Party has elected Ed Miliband as its new leader, choosing him by a knife-edge margin over his better-known older brother, former foreign secretary David Miliband. 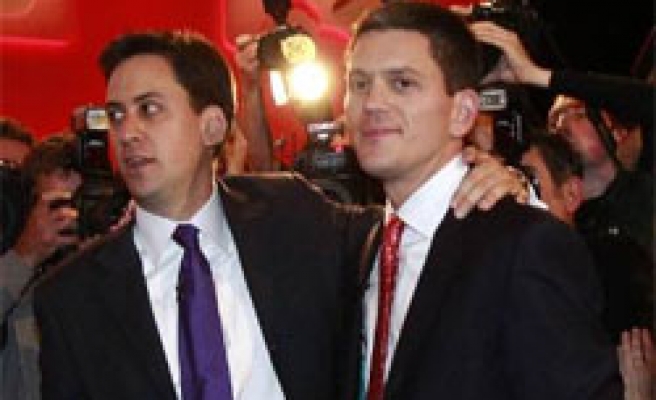 The Labour Party has elected Ed Miliband as its new leader, choosing him by a knife-edge margin over his better-known older brother, former foreign secretary David Miliband.

Former cabinet minister Ed Miliband won the leadership of Britain's opposition Labour Party on Saturday thanks to union backing and could take the party down a more left-wing path.

The party has been searching for a new direction and a new leader since former prime minister Gordon Brown resigned following the party's crushing defeat in a May election, which ended 13 years of Labour rule.

"Today a new generation has taken charge of Labour, a new generation that understands the call of change," Miliband, 40, said as he basked in the applause of thousands of party activists meeting in Manchester, northwestern England.

One of his biggest challenges now is how to respond to major spending cuts planned by Cameron's coalition, and whether to support trade union plans for coordinated strike action in response.

"I believe we must reduce the deficit but I believe we must do so much more than that to have an economy working in the interests of the hard-working people of this country," Miliband said, adding that British society was "too unequal".

Ed Miliband, by contrast, has slightly more left-wing views and reached to victory thanks to the support of unions who largely finance the Labour Party.

The younger Miliband cast himself as the "change" candidate and said New Labour "got stuck in the past" and lost touch with voters.

He criticised Labour's decision to back the Iraq invasion that toppled Saddam Hussein, saying he would have given more time to weapons inspectors.

Miliband's campaign had reached out to Labour's traditional working-class supporters, and his victory was greeted with huge cheers from delegates gathered for the result in Manchester, northwest England.

David Miliband jumped to his feet and grabbed his brother in an emotional embrace.

"David, I love you so much as a brother and I have such extraordinary respect for the campaign that you ran -- the strength and eloquence that you showed," the younger Miliband said.

He pledged to unify a party which in recent years has been riven by feuds between Blair and Brown and their supporters.

Conference delegate Pat Colling said the result could not have been closer. "It must have been nerve-racking for their mum," she said.

Continental Europe's left has failed to capitalise on the biggest financial crisis since the 1930s, leaving many socialist and Social Democratic parties struggling to find a way forward.

He will set out his vision Tuesday in a speech to the party's annual conference, which begins here Sunday.