Russians are worried the death toll could be far higher than the official count. 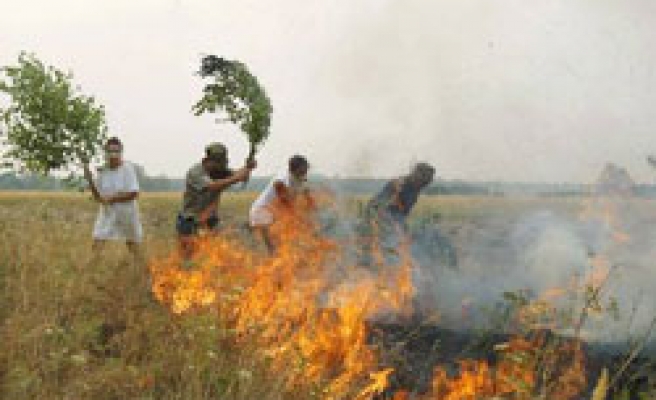 Muscovites are dying from extreme heat and smoke faster than their bodies can be stored, cremated or buried, and Russians are worried the death toll could be far higher than the official count.

Morgues are overflowing and one crematorium in the Russian capital is working around the clock in three shifts, according to staff, even as the health ministry disputes a senior doctor's statement that the monthly death toll doubled in July.

In Mitino on Moscow's northwest, a note at a crematorium warned that it was not accepting any new orders for cremation.

The crematorium's four furnaces are currently "processing" 49 bodies per day, with cremations every 20 minutes, according to a timetable available at the reception.

"Furnaces overheat in these temperatures, and we have to cool them," Vladimir, a security guard, told Reuters. "In practice, there are up to 80-90 cremations per day, and the crematorium's teams work in three shifts day and night to cope."

The Khimkinskoye cemetery in northern Moscow was packed with funeral buses, with a dozen burial ceremonies taking place.

"Since this heat nightmare started ... there has been a drastic increase in funerals over the past two months, two or three times above the average," a cemetery worker said.

As the scorching heat sets new temperature records almost daily and a thick acrid smog from forest fires chokes the giant city of over 10 million, the question of the real number of heat-induced deaths has become a political issue for Muscovites.

Official data show at least 52 people have died in severe fires raging in parts of European Russia in the past few weeks.

But there are no statistics referring to Moscow, amid some media reports that the city's paramedics are told not to include "heat stroke" in death records "to avoid panic".

But the head of the city's health department Andrei Seltsovsky said on Monday that deaths had almost doubled to 700 daily, with heat being the main killer.

The Health Ministry criticised Seltsovsky, saying it was "bewildered by these unofficial figures" and that Moscow's death rates had actually fallen in January-June.

Health Minister Tatyana Golikova told a news conference that the heavy smog with the severe heat was "a real test" indeed for Moscow's residents with vascular and heart diseases. But she said she had no data about a rise in Moscow's death rates.

Irina, a middle-aged woman, was queuing at a Moscow morgue overloaded with bodies to get a death certificate to bury her mother who had died of severe heat.

"My 70-year-old mother died in this heat," she said. "She had been feeling bad for weeks, but the ambulance refused to take her, saying all hospitals were full. Now she is dead, and they are short of space in this morgue too!"

The ambulance doctor told her that her mother died of a heart attack caused by heat, but he did not include that in the official death record, she said.

Natalya, a 43-year-old woman, was crying in the stuffy morgue of hospital No. 62, queuing for the papers to bury her father who had died of a stroke in the extreme heatwave Moscow is experiencing for the first time since records began 130 years ago.

"My old father died right in the street," she said. "He went out to buy bread and collapsed. It took the ambulance hours to arrive, and I spent all this time beside him in the heat."

The morgue at Hospital No. 62, originally designed to store up to 35 bodies, has been overloaded since the heatwave started in June, a morgue attendant said.

"Today we have 80 bodies. We store them anywhere we can because the refrigerators are full," he told Reuters.

A nearby funeral parlour was full of people trying to order coffins and arrange funeral ceremonies.

"The cheapest coffin costs 6,700 roubles ($225) but there are only a few left," a funeral service attendant said. "The demand for these is outlandish as most people can't afford the pricey ones. But how can we cope with this influx of orders?"