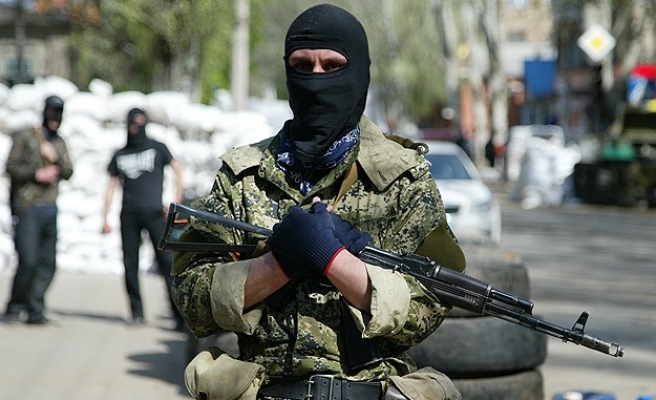 Moscow and Kiev accused each other on Thursday of violating a ceasefire and the United States warned Russia the West might punish it further for its "military escalation" of the Ukraine crisis.

Ukraine accused Russia of sending soldiers and weapons to help separatist rebels in eastern Ukraine launch a new offensive in a conflict that has killed more than 4,000 people. Russia warned Kiev that any resumption of hostilities against the separatists would be catastrophic for Ukraine.

Increasing violence, truce violations and reports of unmarked armed convoys travelling from the direction of the Russian border have aroused fears that a shaky Sept. 5 truce could collapse.

Russia insists the ceasefire outlined by the Minsk protocol is the only way out of the conflict. It denies sending sending troops and tanks into Ukraine.

"(The collapse of the ceasefire) must not be allowed ... It would be catastrophic for the situation in Ukraine," said Russian Foreign Ministry spokesman Alexander Lukashevich.

The Organisation for Security and Cooperation in Europe, which is monitoring the ceasefire, has reported columns of unmarked soldiers and tanks in Ukraine, travelling away from the Russian border.

A Reuters reporter saw a 50-vehicle column travelling toward the rebel stronghold of Donetsk in eastern Ukraine on Tuesday armed with rocket launchers and artillery guns.

Fresh shelling rocked Donetsk. It was unclear who was shooting or whether it came from the city's airport, where Ukrainian troops and rebels are fighting for control despite the truce.

Kiev, which has boosted its defences in eastern Ukraine in case of a new offensive, says the reports of the columns back up its accusations that Russia is sending reinforcements to the rebels. A military spokesman said four Ukrainian servicemen had been killed in the past 24 hours.

After meeting German Foreign Minister Frank-Walter Steinmeier in Berlin, U.S. Ambassador to the United Nations Power said she and Steinmeier were "deeply disturbed, particularly by the military escalation that is afoot".

"In terms of next steps ... our experts are meeting this week in order to see how we can jointly impose costs on Russia," she said.

The West accuses the Kremlin of helping the separatists with arms and troops since they launched their rebellion, a month after Russia annexed the Crimea peninsula from Ukraine in March.

Moscow has shown no sign of changing policy under the pressure of Western sanctions. The EU has signalled it will not ease them but is unlikely to step them up.

One Ukrainian official warned at a briefing in Kiev: "The likelihood of another possible invasion by Russian troops of Ukrainian territory is high ... it could happen at any moment."

In remarks published on Thursday, Ukraine's representative to the OSCE told an Austrian newspaper it was hardly possible to speak of a ceasefire, citing 2,400 alleged breaches of the truce by rebels.

The ceasefire is underpinned by the Minsk agreements, signed by Russia, Ukraine and rebels from the Ukrainian separatist regions of Donetsk and Luhansk.

"There is no intention of abandoning it (the ceasefire) despite all ... attempts to break these agreements by the Russian side," Ukrainian military spokesman Andriy Lysenko said.