Most of Ukraine's navy blockaded by Russia

With Russian forces building up their strength ahead of a referendum that seems likely to result in Crimea becoming part of Russia, Ukraine is facing the humiliating loss of its navy. 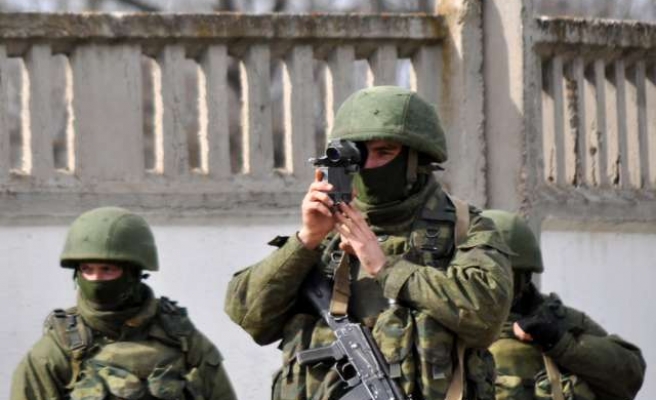 Lashed by the wind as it whips across Crimea's biggest lake, a third of Ukraine's warships have nowhere to go and nothing to do but rise and fall on its choppy waves.

Russian forces have blocked their only exit point to the Black Sea by sinking two ageing vessels there, and Russia's well-armed Moskva missile cruiser can be seen treading water a short distance off the coast, with menace.

With six more of Ukraine's two dozen warships similarly blockaded and Russian forces building up their strength ahead of a referendum that seems likely to result in Crimea becoming part of Russia, Ukraine is facing the humiliating loss of its navy.

Pacing up and down a spartan room in an outbuilding overlooking a row of warships, support vessels, and tugboats, Brigade Commander Vitaly Zvyagintsev says he can't believe the Russian Black Sea Fleet - with whom the Ukrainian navy regularly held exercises in the past - has turned hostile.

"I have two theories," he told Reuters in an interview. "The first is that they want to prevent Ukrainian ships leaving their base and blockading them as they are us now. The second is that they want to make sure that if and when Crimea joins Russia, Ukraine can't get its ships back."

"Georgia doesn't have a fleet any more and the same thing could now happen with Ukraine," he said gloomily, referring to the 2008 Russia-Georgia war which ended with Russian forces taking control of a fifth of Georgia's territory.

The Ukrainian navy has around 25 warships including one submarine, 15 support vessels of different categories and around 15,000 men under arms, 10,000 of whom are based on the Crimean Peninsula.

Zvyagintsev and another senior commander decline to say how many Ukrainian sailors serve on this desolate base, which nestles in a landscape dotted with little apart from wind turbines and rundown Soviet-era apartment blocks.

They say they don't have the technical equipment - cutters and cranes - to remove the sunken ships blocking them in.

Though facing what they euphemistically describe as a "complex situation," black humour prevails.

"It's even quite satisfying that the Russian Black Sea Fleet considers my ships to be so battle-ready that they have left behind the Moskva, a ship that is designed to sink aircraft carriers," said Zvyagintsev with a wry smile.

Eight warships from Russia's Black Sea Fleet initially blockaded the Ukrainians' exit to the Black Sea here, but now that the scuttled ships prevent navigation, only the Moskva remained, he said.

Russian soldiers have taken up residence in the wreck of an abandoned youth hostel near the base here and raised the Russian flag on its roof. They have also dug trenches in front of the naval base's arms store. Pro-Russian locals bring them food.

"The situation has changed," one Russian soldier carrying a heavy machinegun told Reuters, his face covered except for his eyes. "Tensions are much higher now. You have to go. You can't film here."

Ukrainian commanders say they thought that the Russians numbered only about 100 soldiers so far, but said their behaviour was aggressive.

"Things are difficult. The Russians threaten us when we deliver food supplies to our men and point their guns at us," said Vadim Filipenko, the Ukrainian deputy commander at the isolated base.

"They stop our vehicles and tell us they're ready to use their weapons at any moment."

When they arrived on March 2, the Russians demanded that the Ukrainians hand over their weapons, he said.

Meanwhile, Ukraine's naval headquarters in Sevastopol, the same port where Russia's Black Sea Fleet is based, remains under virtual siege by Russian soldiers and pro-Russian activists.

The Ukrainian navy's flagship, the Hetman Sahaidachny frigate, which recently returned from anti-piracy operations in the Indian Ocean, is safely anchored at the Ukrainian port of Odessa, which is not in Crimea.

Russian media quoted a Russian senator a week ago as saying that the ship had defected to the Russian side. It had not.

But Ukrainian commanders say they now fear former Ukrainian Rear Admiral Denys Berezovsky, who did defect to the side of the pro-Russian local authorities, is waiting to take charge of their ships to create what he has called a new Crimean fleet.

Zvyagintsev, a bear of a man, says he and his men will not renounce the oath they took to the Ukrainian people and will not surrender their weapons. He says he has no intention of leaving.

"We have nothing to lose, he said. "I know what I'm ready to die for but do the Russian soldiers? My parents are buried here and I was born in Sevastopol. I am not leaving Crimea."