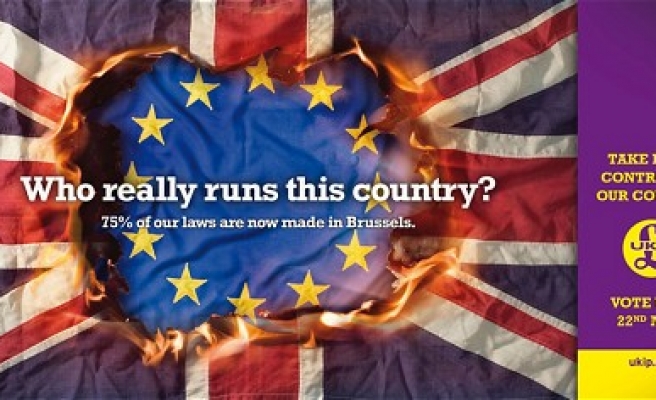 A lawmaker from Britain's ruling Conservative party defected to the anti-EU United Kingdom Independence Party (UKIP) on Saturday, dealing a blow to Prime Minister David Cameron on the eve of his party's annual conference.

The defection of Mark Reckless, the Member of Parliament (MP) for the Rochester and Strood constituency in southern England, is the second since August and comes eight months before a national election in which UKIP could threaten Cameron's re-election chances.

Reckless, who made the announcement at UKIP's annual conference, said that as a Conservative politician he felt he had not been able to keep his promises to voters, one of which was to get the country out of the European Union.

"People feel ignored, taken for granted, over-taxed, over-regulated, ripped off and lied to," Reckless said. "I do feel that the leadership of the Conservative party is part of the problem that is holding our country back."

UKIP wants an immediate British EU withdrawal and an end to what it calls an "open door" immigration policy. It has no seats in the British parliament but won May's European elections in Britain after taking votes from the Conservatives.

If he wins power again next year, Cameron has said he would hold a referendum in 2017 on whether to stay in or get out of the EU. Before that takes place he has promised to try to renegotiate Britain's EU ties.

His resignation as an MP triggers a by-election in his constituency where he will stand for UKIP.

This will be the second such vote prompted by a UKIP defection after Douglas Carswell, another Conservative, defected to UKIP in August. That by-election will be held on Oct. 9.

Political commentators have said that the defections could unsettle the Eurosceptic wing of Cameron's party, estimated to account for around a third of his 304 members of parliament, before next year's national election.

A Conservative spokesman said: "Mark Reckless' decision to join UKIP is completely illogical. He says he wants action on a European referendum, tax and immigration. The only party capable of delivering on these issues is the Conservative Party."

Reckless made headlines in the press in 2010 when he apologised for not taking part in a parliamentary vote on the budget because of the amount of alcohol he had consumed.