Talk in Germany give hope for aid and peace in Syria 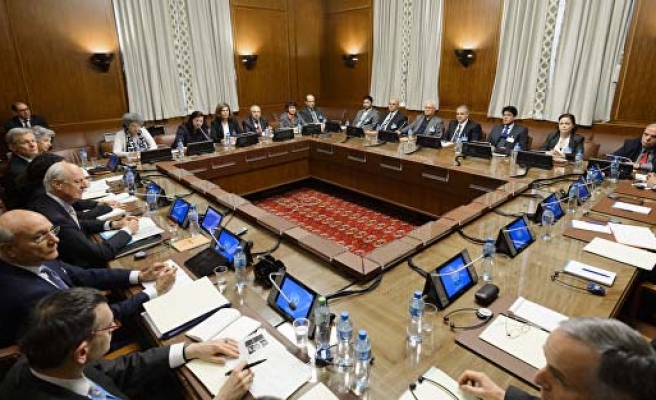 Foreign ministers were gathering in Munich Thursday, with the West desperate to breathe new life into a Syrian peace process that has all but collapsed in the face of a Russian-backed onslaught against the opposition.

Russian bombers and Iranian troops have helped the forces of President Bashar al-Assad besiege the key rebel city of Aleppo in the past fortnight, derailing peace talks in Geneva and threatening Europe with another huge influx of refugees.

Tens of thousands of Syrians are stranded on the Turkish border north of Aleppo, where observers say 500 people have been killed since the bombing started on February 1.

In Munich, US Secretary of State John Kerry and his Russian counterpart Sergei Lavrov will host foreign ministers from the 17-nation Syria contact group, in a meeting billed as a moment of truth for the floundering peace process.

Washington wants a ceasefire and humanitarian access to besieged rebel cities but has threatened an unspecified "Plan B" if talks fail, as tension mounts with Moscow over its air campaign.

"There is no question... that Russia's activities in Aleppo and in the region right now are making it much more difficult to be able to come to the table and to be able to have a serious conversation," Kerry said this week.

While Moscow has promised to bring "new ideas" for kick-starting the peace process to Munich, Russia and Iran are adamant the rebels in Aleppo are just as much "terrorists" as IS and there can be no settlement until they have been militarily defeated.

The rebels say they will not return to talks in Geneva, pencilled in for February 25, unless government sieges and air strikes end.

Syria is a crucial ally and military staging post for Russia and Iran, while a growing number of observers have pointed out that Moscow has benefited from the chaos created by the war, particularly the refugee crisis in Europe.

"For Russia, the war in Syria is about much more than Assad," Koert Debeuf, a research fellow at the University of Oxford, told the Carnegie Europe think tank.

"The goal of Russian President Vladimir Putin is to destabilise and weaken the West. He wants to end the EU's and NATO's attractiveness to countries he considers part of the Russian sphere of influence."

Nonetheless, experts also say there is a limit to how much Russian aerial bombardment can achieve, particularly as the rebels -- who still have the backing of Saudi Arabia and other Gulf countries -- dig in for protracted urban warfare.

"The idea of a full reconquest... seems neither credible nor durable. It will simply turn into a terrorist or guerrilla situation," said Camille Grand, of the Foundation for Strategic Research in Paris.

Lack of US commitment

Many have also criticised the US for not doing more to support the rebels.

Even outgoing French Foreign Minister Laurent Fabius could not hide his frustration as he announced his resignation on Wednesday, saying: "You don't get the feeling that there is a very strong commitment" by the US in Syria.

The US has been reluctant to involve itself in another war after the quagmires of Afghanistan and Iraq, and ultimately is more concerned about combating IS than getting involved in the civil war between Syria's regime and rebels.

"The US has given up the idea of toppling Assad," said Grand. "Kerry seems willing to accept pretty much anything to resolve the crisis... because their objective is to stop the expansion of IS."

Joseph Bahout, a visiting scholar at the Carnegie Foundation in Washington, said the US has "no credibility" left after two years of failed negotiations.

"Nothing is expected from the Americans... they say one thing in public and another in private," he told AFP. "In Munich, they want to agree a ceasefire that will not be put in place because the Russians will continue to bomb the 'terrorists'."

Adding to the complexity, Washington's increasingly close alliance with the Kurdish militias in the fight against IS has put it on a collision course with NATO ally Turkey, which is fighting Kurdish separatists.

Turkish President Recep Tayyip Erdogan on Wednesday furiously criticised the US alliance with Syrian Kurds, saying it was turning the region into "a pool of blood".