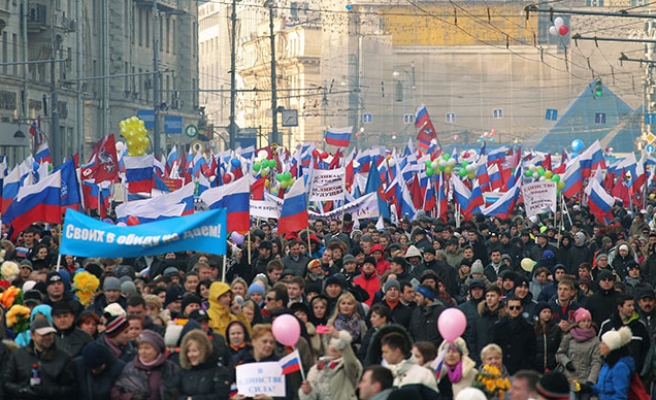 President Vladimir Putin on Wednesday extolled patriotism as tens of thousands marched through Moscow in the Kremlin-choreographed show of unity amid tensions with the West.

Russia marked National Unity Day at a time of growing social and economic problems in the country as well as simmering tensions with the West.

Unity Day was introduced under Putin to mark the 1612 expulsion of Polish occupiers and has grown in importance, alongside a rise in both state-sponsored nationalism and its less controlled far-right version.

Accompanied by Russian Orthodox Patriarch Kirill, the rabbi and the chief mufti of Russia, Putin laid flowers at the Red Square monument to Kuzma Minin and Dmitry Pozharsky, who helped rid Moscow of the Poles four centuries ago.

Later in the day he extolled patriotism at the unveiling of an exhibition which is dedicated to the country's history between 1914 and 1945 and was put together by the government and the Church.

"Love for the homeland was the strongest and invincible feeling, it inspired, helped and saved," the Russian strongman said at the ceremony.

Putin, who has been in power for the past 15 years, sees nationalism as one of his most powerful weapons for maintaining a strong base of support and challenging the West.

In Russia's second city, Saint Petersburg, nationalist activists scrapped plans to hold an annual march and instead held a vigil in honour of those who died in a plane crash as they travelled from the Egyptian resort of Sharm el-Sheikh to Saint Petersburg last weekend.

Some 300 people took part in the event commemorating the 224 victims, an AFP correspondent reported.

One of the participants, Natalia Godlevskaya, 40, said: "We should be together at this tragic moment."