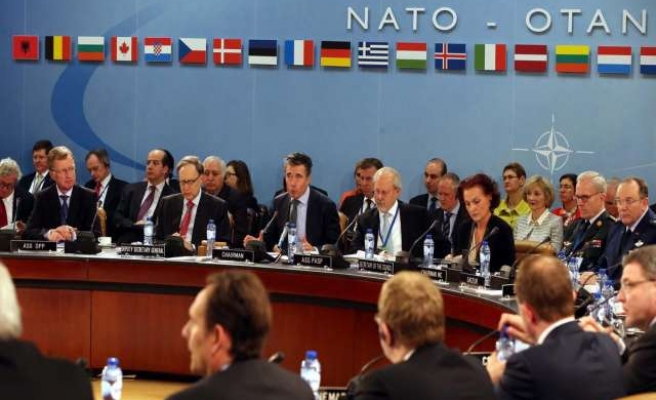 NATO defence ministers will consider on Tuesday what longer term steps the alliance needs to take to bolster its eastern defences and improve its ability to respond to the unorthodox tactics used by Russia in Ukraine.

In the three months since the Ukraine crisis erupted, the U.S.-dominated alliance has sent fighter planes and ships and stepped up military exercises to reassure eastern European allies alarmed by Russia's actions, while making clear it has no intention of intervening militarily in Ukraine.

At a meeting in Brussels on Tuesday, defence ministers from the 28 NATO members will look at longer term measures to strengthen alliance defences in eastern Europe and consider how to combat the tactics used by Russia in Ukraine, which one senior military officer described as "half insurgency, half deliberate destabilization."

"It is ... clear to the alliance that this is the most severe challenge to stability in Europe since the end of the Cold War," the U.S. Ambassador to NATO, Douglas Lute, told reporters on Monday.

Poland has been calling loudly for NATO to permanently station forces on its territory in response to Russia's actions, a move that Moscow says would violate a 1997 agreement between Russia and NATO.

But some NATO allies argue that permanent basing of large numbers of troops in the east is too expensive, not a military necessity and needlessly provocative to Moscow.

They argue that NATO can deter Russia by increasing its ability to react quickly to a crisis. This could be done by pre-positioning equipment in eastern Europe and being ready to send reinforcements there quickly.

Such measures could form part of a "readiness action plan" that NATO Secretary-General Anders Fogh Rasmussen wants NATO leaders to adopt at a summit in Wales in September.

The United States is also likely to drive home its case for NATO to reverse a slide in defence spending since the start of the 2008 financial crisis. Meanwhile, Russia has been sharply increasing its military spending.

"We need to reverse the trend of the last six years on defence spending," Lute said.

One part of NATO's plans is likely to be an agreement to upgrade the readiness of a NATO headquarters in Poland, that of the Multinational Corps Northeast set up by Poland, Germany and Denmark in Szczecin.

The headquarters is likely to get more staff and equipment so it could take charge of any reinforcement effort needed in eastern Europe.

The unconventional tactics used by Russia, such as the use of military exercises to cover an intervention in Ukraine's Crimea region and support for pro-Moscow separatists in eastern Ukraine, are also causing concern at NATO headquarters.

"The Russian armed forces have shown a ... capability which is significant. They have shown that they are able to mobilize on short notice a significant amount of forces, concentrate them and deploy them at every point of their choosing along their Western border ... These are extremely destabilising factors from a military-strategic point of view," a senior NATO official, speaking on condition of anonymity, said.

NATO has suspended all practical cooperation with Russia in response to Moscow's annexation of Crimea. NATO and Russian ambassadors met on Monday for the first time since March but their views on the Ukraine crisis remained far apart.