Anders Fogh Rasmussen said some 40,000 Russian troops were massed along Ukraine's borders "not training but ready for combat." 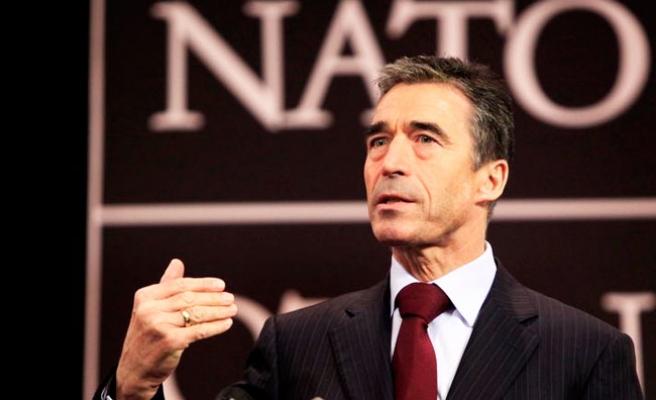 Russia must pull back its troops from the Ukrainian border as a first step to start dialogue over the crisis there, NATO General Secretary Anders Fogh Rasmussen said on Thursday.

Rasmussen said some 40,000 Russian troops were massed along Ukraine's borders "not training but ready for combat."

He told a news conference during a visit to the Czech Republic, a NATO member, that any further military action by Russia would lead to grave consequences and severe economic sanctions.

Russia and the West are locked in a Cold War-style stand-off over Ukraine after Russia' annexation of Crimea and a buildup of unrest in mostly Russian-speaking eastern Ukraine.

"From Prague, I have this message to Russia: You have a choice to stop blaming others for your own actions, to stop massing your troops, to stop escalating this crisis and start engaging in a genuine dialogue," Rasmussen said.

"If Russia is serious about a dialogue, the first step should be to pull back its troops."

"We have seen the satellite images day after day. Russia is stirring up ethnic tensions in eastern Ukraine and provoking unrest. And Russia is using its military might to dictate that Ukraine should become a federal, neutral state. That is a decision which only Ukraine as a sovereign state can make."

He said the alliance was not discussing military options, and the way forward was through diplomacy.

Russia, the United States, Ukraine and the European Union will hold talks next Thursday in Geneva to try to negotiate an end to the crisis in Ukraine, EU diplomats said on Thursday.

Rasmussen said earlier this week NATO was reviewing a 1997 co-operation agreement with Russia and subsequent Rome declaration of 2002 that prevented NATO setting up bases in eastern and central Europe and its foreign ministers would decide on that in June.