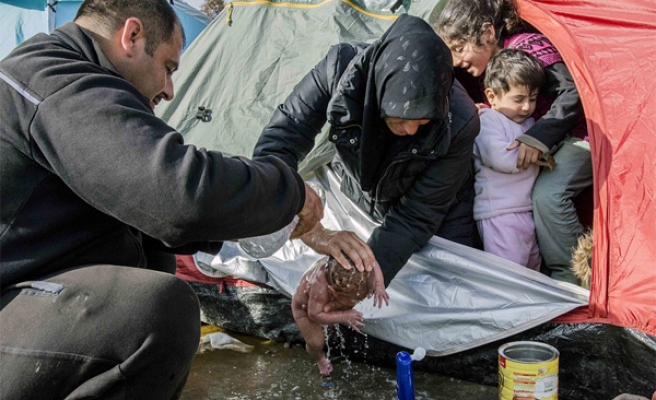 Greece aims to deal swiftly with the refugee overflow at the Idomeni refugee camp on the Greek-Macedonian border where some 12,000 people are camping in miserable conditions waiting to cross.

"I hope the situation at Idomeni is resolved within a week without recourse to force," Mega television Saturday quoted Dimitris Vitsas, the minister charged with coordinating the refugee flow, as saying.

The camp has been hit by torrential rain over the past few days making it difficult for the refugees to start fires.

Conditions in the camp have worsened since four Balkan countries shut their borders on Tuesday and Wednesday, closing off the main route to wealthy northern Europe trodden by hundreds of thousands of refugees in the last two years.

The measures have left thousands -- including many children -- stranded amid Europe's worst migration crisis since World War II.

Vitsas said Athens would try "to convince" refugees to accept a transfer to other reception centres across the country.

He added that 400 had done just that on Friday, moving to centres in northern Greece.

Figures released by Greek authorities Saturday estimated some 12,000 people remained at Idomeni but thousands more are camped out in fields nearby waiting in vain for the reopening of a border closed last week.

Greece is hosting more than 42,000 refugees and refugees with around 7,700 on islands in the Aegean Sea. Many more, most of them fleeing the Syrian conflict, are still undertaking perilous voyages to reach the islands from Turkey.

According to Vitsas, "50,000 spots" will be available in reception centres across Greece "by the end of next week, some 10,000 more than currently.

The closing of borders by neighbouring states has posed a huge headache to the government of Greek Prime Minister Alexis Tsipras.

Last monday, EU and Turkish leaders agreed to a tentative proposal including the return of refugees landing in Greece and a "one-for-one" swap of Syrian refugees.

But the proposal quickly came under fire, with the UN's top officials on refugees and human rights questioning whether expelling refugees en masse from Greece to Turkey would be legal.

The controversial plan is due to be finalised at a EU summit on March 17.