'No evacuation' for 80,000 Russian tourists in Egypt

Russian tourists leaving Egypt will only be able to take cabin baggage with them, and their other luggage will be delivered later on cargo planes according to Russia’s tourism chief. 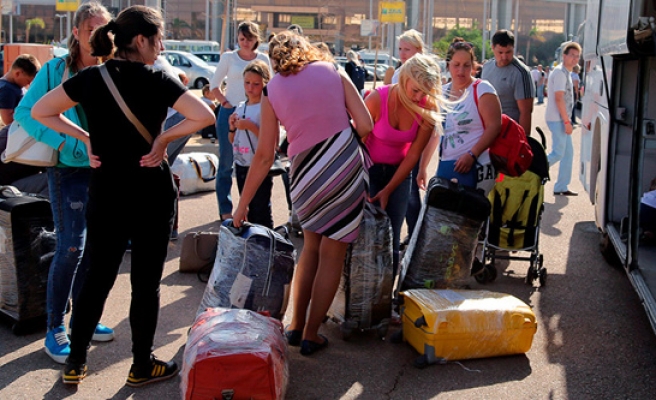 The nearly 80,000 Russian tourists who are currently vacationing in Egypt can return at their own pace in the wake of last weekend's jet crash in the Sinai, officials said.

"There will be no evacuation," Irina Tyurina, a spokeswoman for the RussianUnion of the Tourism Industry, told AFP, adding that most of the Russian holidaymakers were staying in Sharm el-Sheikh and Hurghada.

Russia halted flights to Egypt on Friday amid growing fears that the Russian jet that crashed on October 31 over the Sinai peninsula with 224 people on board was bombed.

Empty planes will be sent to Egypt to bring Russian holidaymakers home, but they will be able to return at their own pace, officials said.

"Tourists will be returning from Egypt to Russia when they planned to," said Deputy Prime Minister Arkady Dvorkovich, who is in charge of a task force set up to oversee the return of tourists.

"Most people left for two weeks -- our usual holiday tour lasts two weeks -- therefore they will return in about two weeks," he said in televised comments late Friday.

In a statement, the labour ministry warned companies against taking any disciplinary action against employees who are now in Egypt and may be unable to show up for work on time.

As part of the crisis response, the Federal Tourism Agency said its representatives would be dispatched to Cairo, Sharm el-Sheikh and Hurghada to help tourists.

FollowingBritain's example, Russia said that holidaymakers would be returning home without their hold luggage, which will be brought back to the country separately.

The emergencies ministry Saturday was set to send two planes, one to Hurghadaand another one to Sharm el-Sheikh, to pick up tourists' luggage.

The number of Russian tourists travelling abroad has gone down significantly because of a plunge in the value of the ruble on the back of falling oil prices and Western sanctions over the Ukraine crisis.

But affordable destinations such as Egypt are still popular with Russian holidaymakers, especially during school holidays.

'Pretend it was not a bomb'

Tour operators are proposing to Russians who have bought packages to Egyptthat they travel to Turkey instead, tourism officials said.

An official of the Russian Union of Travel Industry refused to say whether she expected any tour companies to go bankrupt as a result of the crisis.

"Of course, it is a serious situation for tour operators," she acknowledged.

Russia halted flights to Egypt after dismissing growing evidence that the plane might have been bombed by jihadists in an apparent act of revenge for Moscow's bombing campaign in Syria.

President Vladimir Putin's spokesman insisted the decision to suspend flights did not mean that Moscow believed the crash was caused by a deliberate attack.

Political analyst Stanislav Belkovsky said on Russian radio: "Putin understands that this is a terror attack, an attack which is a direct consequence of the military adventure in Syria which could not and cannot be justified from the point of view of Russia's national interests."

Summing up what he said was the Kremlin's thinking, he added: "But on the other hand, let's pretend that this is not true."