No headway on Ukraine after five-hour Minsk summit

Russia and Ukraine have failed to reach a concrete agreement over the crisis in eastern Ukraine after talks in the Belarus capital Minsk. 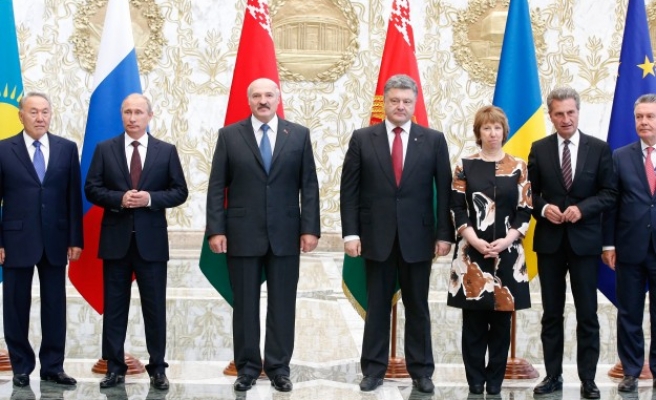 Ukrainian President Petro Poroshenko promised after late-night negotiations with Russia's Vladimir Putin to work on an urgent ceasefire plan to defuse the separatist conflict in the east of his former Soviet republic.

The first talks between the two leaders since June were described by Putin as positive, but he said it was not for Russia to get into the details of truce terms between the Kiev government and two rebel eastern regions.

"We can only contribute to create a situation of trust for a possible, and in my view, extremely necessary, negotiation process."

Poroshenko, after two hours of one-to-one talks which he described as "very tough and complex", told reporters: "A roadmap will be prepared in order to achieve as soon as possible a ceasefire regime which absolutely must be bilateral in character."

Despite the positive tone, it remained unclear how the rebels would respond to the idea of a ceasefire, how soon it could be agreed and how long it might stick.

And with Putin insisting the details were an internal matter for Kiev, there was no sign of progress on a fundamental point of disagreement: Ukraine's charges that Moscow is sending arms and fighters to help the rebels, and Russia's adamant denials.

The leaders shook hands at the start of their meeting in the Belarussian capital Minsk just hours after Kiev said it had captured Russian soldiers on a "special mission" on Ukrainian territory.

Responding to a video of the detained servicemen, a Russian defence ministry source told Russian news agencies that they had crossed the border by mistake. But Ukraine's military spokesman dismissed that, mocking the idea that "the paratroopers got lost like Little Red Riding Hood in the forest".

The Minsk talks, preceded by six hours of wider negotiations with top European Union officials and the presidents of Belarus and Kazakhstan, were aimed at ending five months of conflict that has heightened tensions between Russia and NATO, prompting both to step up military manoeuvres.

A United Nations report obtained by Reuters said more than 2,200 people have been killed, not including the 298 passengers and crew who died when a Malaysian airliner was shot down over rebel-held territory in July.

The crisis has prompted the United States and EU to slap sanctions on Russia, drawing retaliation from Moscow in a trade battle that threatens to tip Russia into recession and snuff out economic recovery in Europe.

"We all wanted a breakthrough," President Alexander Lukashenko of Belarus told reporters after the multilateral part of the talks had finished.

"But the very fact of holding the meeting today is already a success, undoubtedly," he said. "The talks were difficult. The sides' positions differ, sometimes fundamentally ... Everybody agreed on the need to de-escalate and free hostages."

EU foreign policy chief Catherine Ashton told reporters: "It was cordial but positive. There was a sense in which the onus was on everyone to see if they could do their best to try to resolve this."

In a televised statement at the start of the talks, Putin urged Poroshenko not to step up his offensive against the pro-Moscow rebels, and threatened to slap economic penalties on Kiev for signing a trade accord with the European Union that he said would squeeze Russian goods out of the Ukrainian market.

He said the Russian economy could lose about 100 billion roubles ($2.8 billion) if European goods flooded in via Ukraine after Kiev signed the agreement with the EU in June. Moscow would retaliate with trade measures if that were to happen.

But striking a positive note after the meetings, Putin said the two presidents agreed to talks on Russian gas supplies to Ukraine.

"We need to resume our energy dialogue, including about gas problems. Sincerely speaking, this is a complicated issue, it has reached a dead end, but we still need to talk about it. We agreed to resume these consultations," he said.

European Energy Commissioner Guenther Oettinger said in Minsk that three-way gas consultations would take place in Moscow on Friday between Russia, Ukraine and the EU.

The last such talks broke down in June, prompting Russia's Gazprom to sever supplies to Ukraine in a dispute over pricing and debt.

Poroshenko, in his opening comments, demanded a halt to arms shipments from Russia to the separatist fighters. He defended a peace plan he issued in June, when the rebels in the southeast Donbass region scorned his invitation to lay down their arms and leave by a safe corridor.

"The prime condition for a stabilisation of the situation in Donbass is the establishment of effective control over the Russian-Ukrainian border. It is vital to do everything to stop deliveries of equipment and arms to the fighters," he said.

Earlier on Tuesday, a day after announcing it had detained 10 Russian paratroopers who crossed the border in a column of armed infantry vehicles, Ukraine released video of the captive soldiers.

In footage posted on the official Facebook page of the Ukrainian government's "anti-terrorist operation", the men were shown dressed in camouflage fatigues.

"I did not see where we crossed the border. They just told us we were going on a 70 km (45-mile) march over three days," said a man who gave his name as Ivan Milchakov and said he was from a paratroop regiment based in the Russian town of Kostroma.

"Everything is different here, not like they show it on television. We've come as cannon fodder," he said in the video.

Russian news agencies quoted a defence ministry source as confirming that Russian servicemen had crossed into Ukraine but saying they did so inadvertently.

"The soldiers really did participate in a patrol of a section of the Russian-Ukrainian border, crossed it by accident on an unmarked section, and as far as we understand showed no resistance to the armed forces of Ukraine when they were detained," the source said.

"This wasn't a mistake, but a special mission they were carrying out," military spokesman Andriy Lysenko said in a televised briefing.

RIA news agency later quoted Lysenko as saying the men were not prisoners of war, but had been detained for crossing the border illegally and helping and taking part in a "terrorist organisation", the government's description of the separatists.

Putin appeared to play down the incident, saying: "I hope in this case there won't be any problems with the Ukrainian side."