"We have memorials in churches and in mosques, in parliament and in the government headquarters, on the streets and in squares," Prime Minister Jens Stoltenberg said. 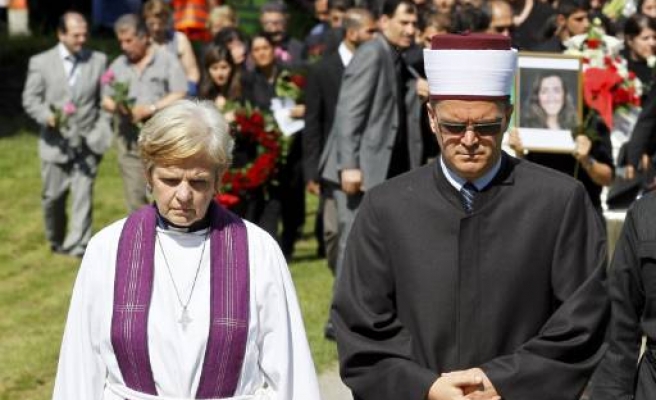 Norwegians united in mourning on Friday as the first funerals were held a week after anti-Islam zealot Anders Behring Breivik massacred at least 76 people in attacks that traumatised the nation.

Holding red roses aloft, members of the ruling Labour Party held a sombre memorial in a hall in central Oslo with calls for more democracy, unity and openness in revulsion at the worst attacks in the Nordic nation's peacetime history.

"Evil has brought out the best in us. Hatred engenders love," Prime Minister Jens Stoltenberg said of the killings that targeted his government and a youth meeting of his Labour Party on an island near Oslo. Many of the dead were teenagers.

"We have memorials in churches and in mosques, in parliament and in the government headquarters, on the streets and in squares," he said. Outside, a single clap of thunder accompanied a downpour as he spoke.

In Nesodden, south of Oslo, the first funeral was held for Bano Rashid, aged 18, who came to Norway in 1996 with her family fleeing Kurdistan in northern Iraq. She was among 68 people shot dead in Breivik's rampage at Utoeya island.

In the speeches in Oslo, no one mentioned Breivik, 32, by name. Police interrogated him on Friday, for the second time since he was arrested, and said he was "strikingly calm".

Flags around the nation flew at half mast to mark a day of remembrance one week after Breivik set off a bomb in central Oslo that killed 8 people.

He then drove out of Oslo and shot 68 people at the summer youth camp. Breivik accused Labour of being too accommodating to Muslims and tolerating multiculturalism.

"We have taken our country back... we will take Utoeya back," said Eskil Pedersen, head of the Labour youth movement which plans to hold new summer camps on the island.

In Nesodden, Rashid was buried in a Muslim section of the cemetery of the picturescue Lutheran church, after several hundred mourners followed her casket led by a Lutheran priest and an Imam.

"Seeing the imam and the priest walking together from the church was a mighty image -- the strongest message that can be sent to counter the forces we have been witness to," Foreign Minister Jonas Gahr Stoere said.

The day she was gunned down, Rashid had lent a pair of boots to former Prime Minister Gro Harlem Brundtland after it began to rain on Utoeya island, he said.

Police said they had identified all of the dead, but declined to say if that meant the final toll was 76. They have previously named 41 of those killed and said new names would be issued at 1600 GMT.

Police believe Breivik acted alone even though he said in a 1,500 page manifesto that he was the member of a wider network of Knights Templar, bent on what he saw as a crusade to end "cultural Marxism" and save Europe.

"No others have been arrested. Everything points towards one (person)," police lawyer Paal-Fredrik Hjort Kraby said.

In another funeral, Ismail Haji Ahmed, 19, was to be buried near Hamar, north of Oslo. Ahmed, a dancer who appeared in a television talent show this year, was one of three in his family who were at Utoeya, parliamentarian Thomas Breen said.

"We have lost one of our most beautiful roses," he told Reuters. The two other family members survived.

An opinion poll indicated that support for Labour had leapt about 10 percentage points in the days after the attacks, when Stoltenberg has won praise for his calm handling of the crisis.

The poll, for newspaper Sunnmoersposten, found that Labour support jumped to 38.7 percent immediately after the attacks from 28.1 percent just before, in a two-part poll each covering about 500 people in the days around July 22.

At the same time, support for the populist right-wing Progress Party, of which Breivik was once a member, fell along with backing for the opposition Conservative party.

The Progress Party became the second biggest in parliament after a 2009 election on an anti-tax and anti-immigration platform, but says Breivik was not an active member.

Stoltenberg was also due to visit a mosque to stress national unity. Many red and white roses lay wilting in the streets of Oslo after a march on Monday when 200,000 people, equivalent to a third of the capital's population, turned out.

A court has appointed two psychiatrists to try to discover why Breivik staged his attacks, with a mandate to report back by Nov. 1. His lawyer has said he is probably insane.

Norway plans to set up an independent "July 22 Commission" to examine the attacks, including investigating whether police reacted too slowly to the shootings at Utoeya island, when Breivik was able to kill for more than an hour.

Police have said officers drove the 45 km from Oslo because they had no helicopter available.