Flags around the nation flew at half mast to mark a day of memorial one week after Breivik, an anti-Islam zealot, set off a bomb in central Oslo that killed 8 people. 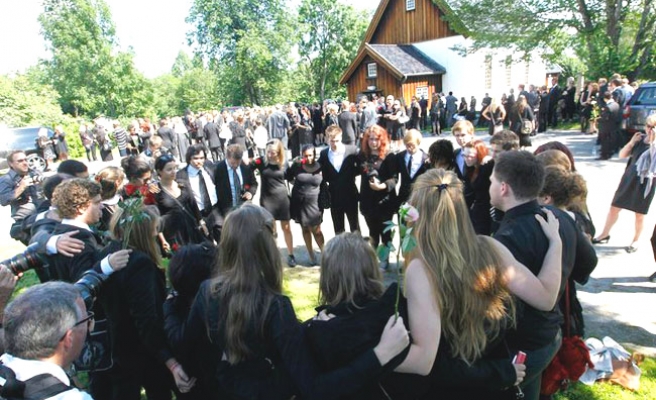 Norway will hold the first funerals on Friday for victims of Anders Behring Breivik's massacre of 76 people a week ago amid signs of a leap in popularity for the ruling Labour Party that was his main target.

Flags around the nation flew at half mast to mark a day of memorial one week after Breivik, an anti-Islam zealot, set off a bomb in central Oslo that killed 8 people. He then shot 68 people at a summer camp for youths of the ruling Labour Party.

Bano Rashid, aged 18 and who came to Norway in 1996 with her family fleeing Iraq, will be buried at Nesodden church near Oslo in the first funeral. It will combine Muslim and Christian prayers as the nation tries to come to terms with the trauma.

Foreign Minister Jonas Gahr Stoere will be among the mourners at 1100 GMT.

"We have to stand united and carry their dreams forward," Nesodden mayor Christian Holm said of Rashid and another Nesodden youth, Diderik Aamodt Olsen, who died in the attacks on Utoeya island that were worst in Norway since World War Two.

In a lower key funeral, Ismail Haji Ahmed, 19, will be buried near Hamar, north of Oslo. Ahmed, a dancer who appeared in a television talent show this year, was one of three in his family who were at Utoeya, parliamentarian Thomas Breen said.

"We have lost one of our most beautiful roses," he said. The two other family members survived.

Breivik, who said he was on a crusade to save Europe by striking at the Labour Party which he accused of accommodating Muslim culture, was taken from jail to be interrogated by police for a second time on Friday.

An opinion poll indicated that support for Labour had leapt about 10 percentage points in the days after the attacks, when Prime Minister Jens Stoltenberg was praised for his calm handling of the crisis. Stoltenberg has called for national unity in revulsion at the attacks.

At the same time support for the populist right-wing Progress Party, of which Breivik was once a member, fell sharply along with backing for the opposition Conservative party. The poll was of about 500 people each time.

The Progress Party became Norway's second biggest in parliament after the 2009 election on a largely anti-immigration platform, but says Breivik was never an active member.

Separately, Stoltenberg will attend a memorial service held by the Labour Party and its youth wing in Oslo.

He also plans to take part in a ceremony at 3.30 p.m (1330 GMT) in the heart of Oslo to mark the exact time last week that a car, packed with a bomb made of fertilisers, devastated his office and other ministry buildings.

Stoltenberg is also due to visit a mosque to stress national unity.

Rashid was an outstanding pupil who grew up wanting to become a lawyer, and became active in the local branch of the Labour Party youth wing. She dreamed of winning a seat in the Norwegian parliament.

Many red and white roses lie wilting in the streets of Oslo after a march on Monday when 200,000 people, equivalent to a third of the capital's population, turned out to show a rejection of violence.

Psychiatrists have been appointed to try to discover why Breivik staged his attacks. His lawyer has said he is probably a madman. "I don't think anyone else in the world has the same understanding of reality" as Breivik, his lawyer Geir Lippestad told the daily Aftenposten.

Norway plans to set up an independent commission on the attacks, including investigating whether police reacted too slowly to the shootings at Utoeya island, when Breivik was able to kill for more than an hour.

Police have said officers drove the 45 km from Oslo because they had no helicopter available.