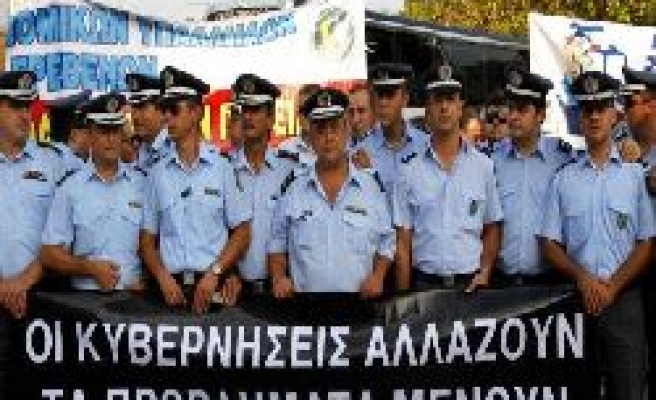 Prime Minister George Papandreou will try to soothe austerity-weary Greeks with an emphasis on growth in a major economic speech on Saturday, but tight budget constraints leave him little to offer.

Tied by the conditions of a 110 billion euro EU/IMF bailout deal to rescue Greece from bankruptcy, his socialist government has imposed tax rises and draconian salary and pension cuts to fight deficits, prompting strikes and protests.

"Papandreou cannot promise handouts as fiscal conditions do not allow it. He is unlikely to draw an overoptimistic picture, to avoid the risk of relaxation in the effort to repair public finances," said political analyst George Sefertzis.

"I expect him to signal that not only the (fiscal) operation must succeed, but that the patient must also survive it."

All eyes will be on Papandreou to see if he signals any relaxation of measures to appease a restive public and risk the wrath of international lenders when he speaks at 8 p.m. (1700 GMT) at a trade fair in the northern city of Thessaloniki.

Greek media said Papandreou was likely to devote a major part of his address to policy initiatives to jump start growth and attract investments as a way to help pull Greece out of a deep recession and create jobs.

During a cabinet meeting on Friday, he asked ministers for moves to help entrepreneurship and boost investment in Greece.

"We are waiting for a sign that there will soon be growth incentives," said Telemachos Pentzos, 39, a manager at a food export company. "There is intense pressure from competitors and the barrage of measures so far has not helped investments."

Labour unions, which have locked horns with the government repeatedly this year, have planned major rallies which some analysts say may launch a new season of protests as austerity is starting to be felt on the streets.

Police said more than 4,000 police officers would be deployed in Thessaloniki on Saturday for fear of possible violence but expected rain may dampen protesters' spirits.

Some shops in the city centre covered windows with wood panels for fear of protests turning violent.

This, along with a string of political scandals, helped Papandreou to trounce Karamanlis at an election soon afterwards.

Analysts say this year Papandreou could offer some minor relief along with a growth plan for next year to offer Greeks the prospect of a way out of the crisis.

Consumption has been hit as public sector wages were cut by 15 percent, pensions by 10 percent, and value added tax increased by 4 percentage points to 23 percent.

The economy is set to contract by 4 percent this year and unemployment rose to 11.6 percent in July, from 8.6 the year before. Germany's Aldi, the world's biggest discount food retailer, and French retailer FNAC said last month they were leaving the Greek market because of the recession.

While applauded by international lenders for slashing spending, austerity measures are hurting revenues. Data issued on Thursday showed the government was behind for the first time in its target to cut the deficit by 39.5 percent this year.

"The market is pretty worried about whether the government will find the golden medium to kick start the economy and secure the revenues that are missing," said an Athens based analyst. "Only if they manage to find this golden medium, will the country be able to get out of this tunnel."