French President Francois Hollande called united international action to tackle the threat from ISIL militants as he opened a conference on Iraq bringing together members of a U.S.-led coalition. 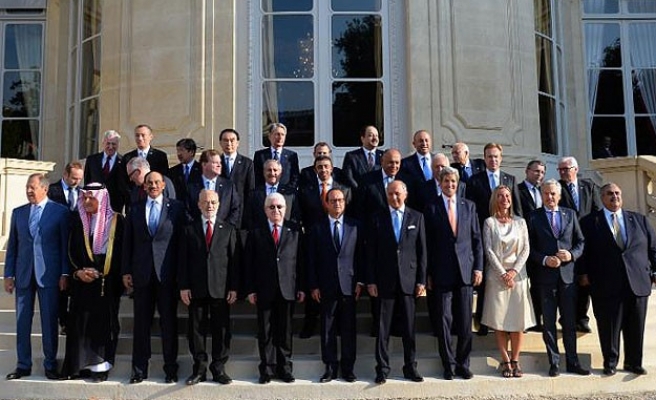 World powers backed military measures on Monday to help defeat ISIL fighters in Iraq, boosting Washington's efforts to set up a coalition, but made no mention of the tougher diplomatic challenge next door in Syria.

France sent fighter jets on a reconnaissance mission over Iraq, a step closer to becoming the first ally to join the United States in new bombing there since President Barack Obama declared his plans to establish a broad coalition last week.

Paris also hosted an international conference, attended by the five U.N. Security Council permanent members, European and Arab states, and representatives of the EU, Arab League and United Nations. All pledged to help the government in Baghdad fight against ISIL militants.

But a statement after Monday's conference made no mention at all of Syria - the other country where ISIL fighters hold a wide swathe of territory. Iraq attended Monday's meeting but Syria did not, nor did its main regional ally, Iran.

Obama pledged last week to establish a coalition to defeat ISIL fighters in both Iraq and Syria, plunging the United States into two separate civil wars in which nearly every country in the Middle East has a stake.

"All participants underscored the urgent need to remove Daesh from the regions in which it has established itself in Iraq," said a statement after Monday's talks, using an Arabic acronym for the group ISIL.

"To that end, they committed to supporting the new Iraqi Government in its fight against Daesh, by any means necessary, including appropriate military assistance...." it said.

"The throat-slitters of Daesh - that's what I'm calling them - tell the whole world 'Either you're with us or we kill you'. And when one is faced with such a group there is no other attitude than to defend yourself," Fabius told a news conference at the end of the talks.

"ISIL's doctrine is either you support us or kill us. It has committed massacres and genocidal crimes and ethnic purification," he told delegates.

Monday's conference was an important vote of confidence for the new Iraqi government, formed last week, led by a member of Iraq's Shi'ite majority, Prime Minister Haider al-Abadi, and also including minority Sunnis and Kurds in important jobs.

Iraq's allies hope that Abadi will prove a more consensual leader than his predecessor Nuri al-Maliki, a Shi'ite whose policies alienated many Sunnis. They hope that the new Iraqi government will win back support from Sunnis who had backed the ISIL's revolt.

Monday's conference shows that Abadi enjoys broad international good will, which means Washington will probably face little diplomatic pushback over plans to use air strikes against ISIL fighters on that side of the frontier.

Syria, however, is a much trickier case. In a three year civil war, ISIL has emerged as one of the most powerful Sunni groups battling against the government of President Bashar al-Assad, a member of a Shi'ite-derived sect.

Washington remains hostile to Assad, which means any bombing is likely to take place without permission of the government in Damascus. Russia, which has a veto at the U.N. Security Council and supports Assad, says bombing would be illegal without a Security Council resolution. Turkey and other countries are wary of measures against ISIL that might help Assad.

The United States resumed air strikes in Iraq in August for the first time since the 2011 withdrawal of the last U.S. troops, fearful the militants would break the country up and use it as a base for attacks on the West.

Obama's plans, announced last week, would involve stronger military action in Iraq and extend the campaign across the frontier to Syria. Secretary of State John Kerry has said he believes he can forge a solid alliance despite hesitancy among some partners and questions over the legality of action.

U.S. officials said several Arab countries have offered to join the United States in air strikes against ISIL targets, but declined to say which countries made the offers. Ten Arab states committed last week to joining a military coalition, without specifying what action they would take.

Britain, Washington's main ally when it invaded Iraq in 2003, has yet to confirm it will take part in air strikes, despite the killing of British aid worker David Haines by ISIL fighters this past week.

France has said it is ready to take part in bombing missions in Iraq but is so far wary of action in Syria. French officials say the coalition plan must go beyond military and humanitarian action, arguing there must also be a political plan for once ISIL has been weakened in Iraq.

The absence from Monday's conference of Iran, Assad's main ally and by far the most influential neighbour among Iraq's Shi'ite majority, shows how difficult joint action can be in the Middle East. French officials said Arab countries had blocked Tehran's presence.

"We wanted a consensus among countries over Iran's attendance, but in the end it was more important to have certain Arab states than Iran," a French diplomat said.

Norwegian daily VG quoted Foreign Minister Boerge Brende as saying Oslo, which is at the Paris conference, was considering a military presence in Iraq.

"First and foremost we have said that there would an additional contribution to humanitarian work. But we are also considering whether we will, separately to the humanitarian help, also contribute with military capacity building," he said.

"This could be training of personnel, but it will depend on the demand we get," he added.