Despite a huge effort involving over 150,000 people fighting fires, authorities appeared to be losing the battle. 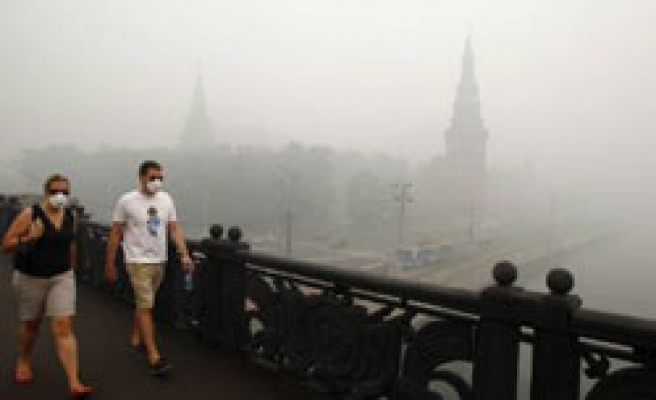 Dense clouds of acrid smoke from peat and forest fires choked Russia's capital on Friday, seeping into homes and offices, forcing planes to divert and obliging residents to wear surgical masks on their faces.

Air pollution surged to five times normal levels in the city of 10.5 million, the highest sustained contamination since Russia's worst heatwave in over a century began a month ago.

"My head aches, I feel nausea and I'm scared for my 83-year-old mother, who feels really bad," said 50-year-old businesswoman Marina Orlova in the centre of Moscow.

Officials urged Muscovites to not venture outdoors because of the dangerous levels of carbon monoxide and fine particles in the air. Weather forecasts said the smoke, which has reached even underground metro stations, would stay until Monday.

"Looking at the overall duration (of the pollution), today's smoke level is the worst yet," said Alexei Popikov, an expert on air quality at Moscow's state-run pollution monitoring agency.

However the true toll from the smoke and heatwave may be much higher. Interfax news agency quoted an "informed source" on Friday saying death rates in Moscow surged nearly 30 percent in July because of the "disastrous heat and smoke cloud".

One of the world's top grains producers, Russia has announced a temporary ban on exports after crops were ravaged by the dry weather. The news sent world wheat prices soaring.

Despite a huge effort involving over 150,000 people fighting fires, authorities appeared to be losing the battle.

The size of peat fires burning in the Moscow region almost doubled from 37.5 hectares on Thursday to 65.7 hectares on Friday, the regional branch of the Emergencies Ministry said on its website.

The emergency has prompted the country's enfeebled opposition to complain of poor fire safety readiness and a slow, ineffective government response. Media noted that Moscow Mayor Yuri Luzhkov was on holiday as the smoke engulfed his city.

Russia's state-controlled media have been at pains to show a vigorous government effort to fight the blazes and have avoided detailed reporting on the hazards to health.

The government has warned that the fires could pose a nuclear threat by releasing into the atmosphere radioactive particles buried in trees and plants from the 1986 Chernobyl nuclear disaster.

Russia's nuclear chief, Sergei Kiriyenko, said on Thursday that fire was raging near a nuclear arms-producing facility in the closed town of Sarov, though he assured President Dmitry Medvedev that all explosive and radioactive material had been removed.

Around 500 soldiers were felling trees to create firebreaks in a forest burning near Sarov in the Nizhny Novgorod region east of Moscow, the state-run RIA news agency cited Defence Ministry Col. Sergei Dorozhkin as saying.

The first Soviet nuclear weapon was made in 1949, in Sarov at the Institute of Experimental Physics, which continues to be the main nuclear design and production facility in Russia.

The smoke will not clear for at least three days, according to Fobos weather agency, which provides forecasts for some of Russia's largest media outlets.

A spokeswoman for Russia's biggest airport Domodedovo said 15 planes had been diverted to other airports in Russia and 25 flights delayed after visibility fell to around 400 metres (yards). By the afternoon, the airport was operating normally.

Russia's aviation authority said at least 60 planes had been diverted to as far away as Ukraine from Moscow's busy airports. Flights and trains out of Moscow were booked solid as residents tried to flee the smoke.

Employees in offices across Moscow were being sent home as oppressive, thick smoke filtered into buildings. A spokesman for Russia's No. 1 retailer X5 said all 1,500 staff were ordered home.

"I can smell smoke right here in the office," an employee at a mid-sized Russian bank, speaking on condition of anonymity, told Reuters. A trader in another medium-sized bank said smoke had entered the building and staff were given permission to leave.

Employees at several businesses that use couriers and on-foot delivery men told Reuters they were reluctant to process small orders on Friday as they did not want to step outside.

Many Muscovites sent their families out of the city to stay at summer residences in the countryside. Although the smoke affected many of these, residents said air quality was still better because of the lack of vehicle pollution.