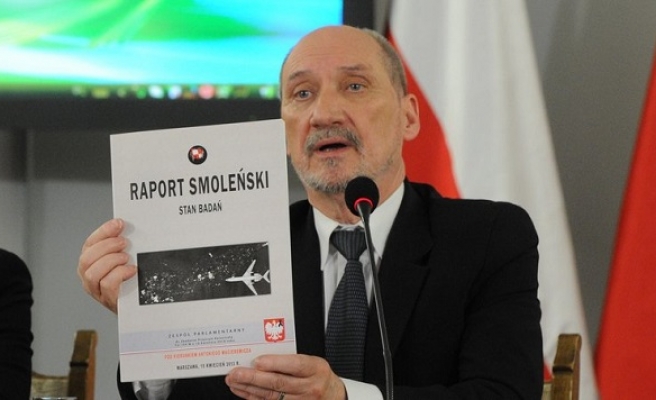 Poland has accused Russia of downing a Polish presidential jet in 2010 in what it called an act of "terrorism," sparking an immediate retort on Monday from Moscow.

"We can say that we were the first great victim of the terrorism we now see playing out before our eyes," Defence Minister Antoni Macierewicz said, according to a transcript released Monday of a weekend university lecture.

The crash killed then president Lech Kaczynski and 95 other mostly senior officials in what is regarded as Poland's worst peacetime disaster.

He was the twin brother of Jaroslaw Kaczynski, leader of the conservative Law and Justice (PiS) party that swept back to power in October after eight years in opposition.

The minister also alleged the crash was orchestrated in reaction to Poland's 2009 request to define as "genocide" the World War II Soviet massacre of Polish officers in Russia's western Katyn forest.

"There is no doubt about the fact that what happened ... was meant to deprive Poland of a leadership that was moving our nation toward independence," Macierewicz added.

Moscow responded immediately to the minister's allegations, with Kremlin spokesman Dmitry Peskov calling them "unfounded, biased and having nothing to do with real circumstances of this plane crash."

"If the defence minister in some way accuses a state of terrorism, we can only be terrified, because one does not leave acts of terrorism without a response," the former deputy foreign minister told reporters.

In February, the PiS government launched a fresh probe into the crash, arguing that key facts pointing to "Russia's responsibility" were "hidden" during a previous investigation.

Right-wing politicians have long insisted the crash was no accident, even though both Polish and Russian investigators found pilot error, bad weather and poor air traffic control to blame.

The crash occurred as a Polish state delegation was en route to memorial ceremonies in Russia's Katyn forest for thousands of Polish army officers killed by the Soviet secret police in 1940, a massacre the Kremlin denied until 1990.

Nearly one quarter of Poles believe the air crash was an assassination, according to a poll last year.

The rest blamed other factors, including 37 percent who thought the pilots were pressured to land despite heavy fog.