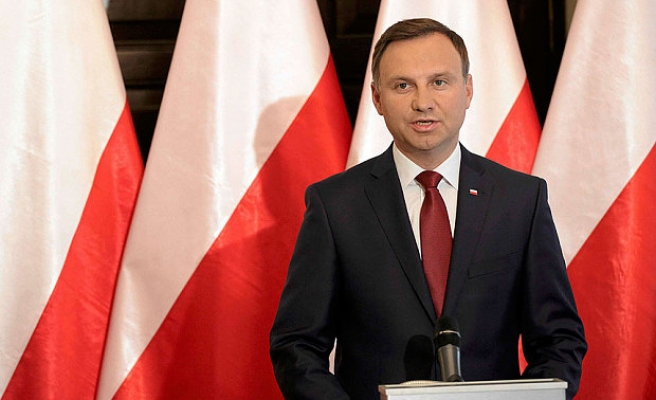 Poland's new president Andrzej Duda said Thursday his country was reluctant to help with the refugees from the Middle East or Africa because of a potential influx soon from Ukraine.

But asked whether Poland would be willing to take in more asylum-seekers from Africa's crisis zones, Syria and Iraq streaming into the the EU, Duda insisted Poland was in a tight spot.

"In terms of refugees, we have a particular problem due to the conflict in Ukraine: as long as the war continues, thousands of Ukrainians will continue to flee the country, mainly to Hungary and Poland," he said.

"We are the closest neighbouring country for the Ukrainians and they can feel safe (with us). If the conflict escalates again, many more refugees will come to us."

Duda said there were "already indications that hundreds of thousands of Ukrainians want to flee to us".

"Other European countries should consider that when we talk about a willingness to help," he said.

Duda is due on Friday in Germany, which expects to take in 800,000 asylum-seekers this year, far more than any other EU country and four times the number seen in 2014.

This week, Berlin confirmed it had eased asylum rules for Syrians in a move expected to relieve pressure on southern European nations as thousands more migrants pour into the bloc.

Warsaw recently accepted 2,000 refugees to ease the burden on Italy and Greece but has resisted German calls for a more even distribution of asylum-seekers within the EU.

Poland received 2,318 asylum applications from Ukrainians in 2014 compared to 46 the previous year, according to official figures. The number of requests for six-month visas rose to more than 830,000 last year from around 720,000 in 2013.