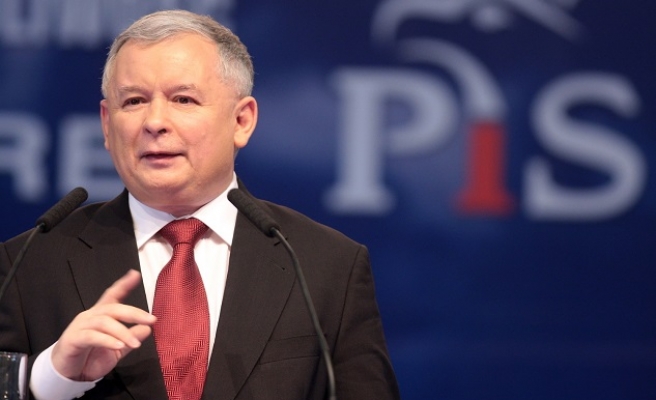 Within a few short weeks Poland's public media have become more combative, more eurosceptic and more favourably disposed to the authorities, amid a purge by the new right-wing government that has triggered broad outcry, experts say.

After scoring a landslide victory in October elections, the governing Law and Justice (PiS) party led by Jaroslaw Kaczynski made no secret of its desire to "reform" public broadcasters alleging -- not without justification -- that they were full of people loyal to the outgoing centrist government.

The PiS wasted no time in passing a law allowing the treasury minister to name a director to oversee public radio and TV, leading to loyalists like Jacek Kurski, a former PiS MEP, taking over public broadcaster TVP.

The legislation giving the government control over Poland's public broadcasters and top court prompted a series of demonstrations and harsh criticisms both at home and across Europe.

The EU even launched an unprecedented probe to see if the Polish government violated the bloc's democracy rules and merited punitive measures.

The installation of PiS allies in TVP's management triggered the highly controversial sacking of journalists more closely associated with the defeated Civic Platform (PO) liberals, including Tomasz Lis -- an unabashed Kaczynski opponent -- and moderates like Piotr Krasko and Karolina Lewicka.

"Over the last few weeks we've witnessed a very critical tone towards the European Union, especially in the context of the migrant crisis," a Western diplomat in Warsaw told AFP on condition of anonymity.

According to the Wirtualne Media (WM) ratings tracker website, it lost 10 percent of its audience, or 410,000 viewers, in January compared to the previous year.

Wieslaw Godzic, a sociologist focused on the media, says that the change in tone at TVP is unmistakable.

Godzic gave the example of a national police chief hired by the PiS, favourably portrayed in full regalia showing off the extravagant office his predecessor equipped using public funds, while an interview with the former chief fired by PiS was unflattering and virtually unintelligible.

"It all smacks of manipulation," says Godzic.

Similarly, TVP portrays "the government as being competent, while the opposition is shown as being divided and frivolous," he adds.

The general message is that Poland "is headed in the right direction and there's no reason for worry".

"The principle of dialogue" in the public media between opposing political forces has been set aside, he notes.

There, themes cherished by the PiS like patriotism and historic heroism appear to be popping up in programming with increasing frequency.

Meanwhile, the influx of new, often inexperienced, journalists to TVP has brought with it a series of gaffes that have been lampooned by leading leftist daily, Gazeta Wyborcza.

A well-known case in point involves a recent report titled "Where is the KOD?", referring to a pro-democracy group that organised protests against the judicial and media changes by the Pis government.

Showing an empty street, a TVP journalist tells the camera that this is the "first weekend without big street protests since KOD was created" and asks whether "protestors have lost their fire or changed strategy".

The next part of the report, which did include statements by opposition politicians, appeared to take a biased stance against the KOD.

In reality, the group had not protested on consecutive weekends, nor had it planned a demonstration for the weekend shown in the TVP report.

Turning a deaf ear to an uproar of ridicule and criticism, TVP left the report up on its website for several days before it finally disappeared.