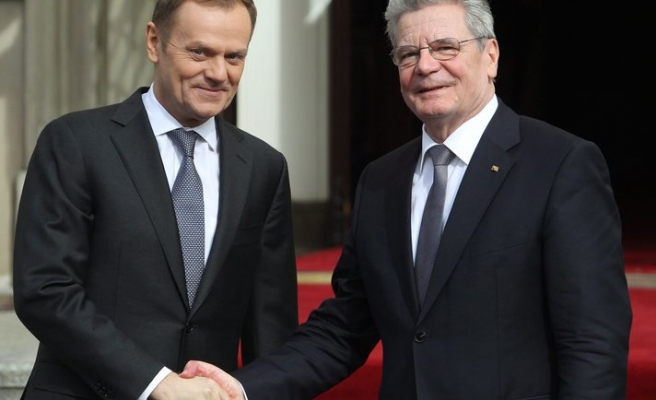 Polish Prime Minister Donald Tusk submitted his resignation on Tuesday in preparation for taking on a top job with the European Union in Brussels, marking the end of an unprecedented seven years in office and the start of an uncertain period for Poland.

Political insiders in Poland, central Europe's biggest economy, expect a handover of power over the next few weeks to Ewa Kopacz, a colleague in Tusk's centre-right Civic Platform party who until now has been speaker of parliament.

But some inside the ruling coalition have questioned whether, with Tusk in Brussels, his successor can hold rival factions within the ruling party in check, and avoid defeat in a parliamentary election late next year.

Tusk set the handover of power in motion when he handed a resignation letter to President Bronislaw Komorowski at a scheduled meeting of the National Security Bureau.

"Yes, I handed over the papers," Tusk told reporters as he climbed into his car after the meeting.

Komorowski is expected to formally accept Tusk's resignation on Thursday and to invite Kopacz, a paediatrician who served a previous stint as health minister, to meet him for talks on forming a new government.

Under Poland's constitution, the president then has two weeks to nominate a prime minister. The prime minister-designate has a further two weeks after that to win approval from parliament, where the ruling coalition has a small but reliable majority.

By holding together disparate camps inside Civic Platform, Tusk was able to win two consecutive elections, a record in post-Communist Poland.

Markets associate him with political stability, a pragmatic approach to tricky relations with neighbours Russia and Germany, and steady stewardship of the economy. His appointment to the post in Brussels is, in part, a recognition of his record.

He will now become the most prominent Pole on the international stage since Pope John Paul II. As president of the European Council, he will steer policy meetings of EU leaders and try to forge consensus in the union of 28 countries as it struggles to build economic recovery and tackle crises like the sanctions row with Russia over Ukraine.

The popularity of Civic Platform has improved markedly since the Brussels job was announced, a phenomenon pollsters describe as the "Tusk effect."

His party has 34 percent support while the conservative opposition Law and Justice party is on 28 percent, according to a poll published this week by TNS Polska. In June, the pollster had Law and Justice leading by an eight-point margin.

But it is not clear if the "Tusk effect" will last until the next election. Kopacz is untested as a leader. She does not command the same authority as Tusk, a quality he used often to quell rebellions within his own party.

Kopacz is likely to announce a revamped cabinet. Finance Minister Mateusz Szczurek, in an interview with Reuters, declined to say if he would keep his job.

But he said markets were less interested in personnel changes than in stable policies.

"The durability of economic policy is not at risk and thus all personnel changes, even if they took place, are of lesser importance," Szczurek said.