Britain was first to endorse Tusk publicly as a candidate, hoping to balance out former Luxembourg premier Jean-Claude Juncker, who was chosen in June to head the executive European Commission 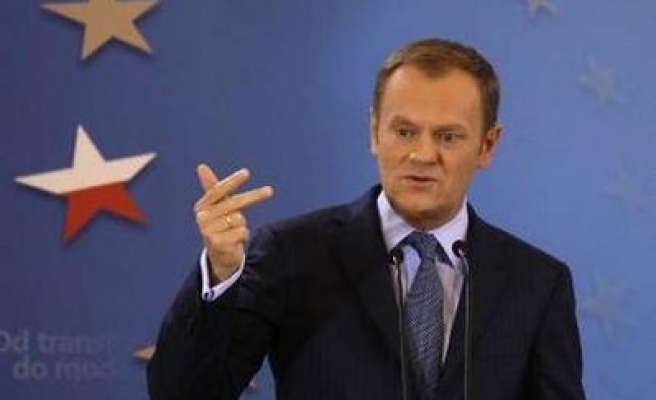 Polish Prime Minister Donald Tusk has emerged as clear favourite for the key post of president of the European Council when EU leaders meet for a special summit on Saturday, several sources familiar with the selection process said.

If confirmed, his appointment to chair and steer policymaking meetings of EU leaders, would be a victory for the 10 ex-communist central and eastern European countries that joined the European Union a decade ago which have demanded that one of the top jobs go to a candidate from their region. It would also consecrate Poland's rise as a major player in the 28-nation bloc alongside EU founders France and Germany.

The pro-European, centre-right Tusk, 57, has not acknowledged in public that he is a contender. He avoided discussing his own future when he announced a giveaway programme of increased benefits for Poles in parliament on Wednesday ahead of a general election next year.

However, two Brussels sources said current council president Herman Van Rompuy, who chairs and prepares EU summits, will put Tusk's name to fellow leaders as part of a package deal in a round of telephone calls on Thursday and Friday.

"Van Rompuy is to call EU leaders today and if no one is opposed to Tusk there is a deal," a person involved in the process said, speaking on condition of anonymity because of the sensitivity of the consultations.

A senior source in Tusk's Civic Platform party told Reuters for the first time on Wednesday there were "different outcomes" possible for the prime minister, "including the option that Tusk takes one of the most important posts in Europe".

BRITAIN, GERMANY, FRANCE ON BOARD

Britain was first to endorse Tusk publicly as a candidate on Tuesday, hoping to balance out former Luxembourg premier Jean-Claude Juncker, a veteran advocate of deeper EU integration, who was chosen in June to head the executive European Commission against fierce British objections.

Diplomatic sources said Merkel has been trying to persuade Tusk to take one of the top EU jobs but the Pole initially rebuffed her, saying he wanted to lead his Civil Platform party to an unprecedented third term in power next year.

An economic liberal and advocate of free trade, Tusk's weak point is that he speaks little English and no French, making it harder for him to communicate on behalf of the EU to a wide audience.

The new leadership team will have to shape Europe's response to issues including an economic slowdown in the euro zone to the Ukraine crisis and Britain's uncertain future in the bloc.

In what one official described as "a subtle game where no candidates campaign", Danish Prime Minister Helle Thorning-Schmidt, a reformist social democrat, was the initial front-runner for the presidency at an inconclusive July 16 summit.

But her chances were stymied partly by eastern revolt against Mogherini, criticised as inexperienced and too "soft" on Russia, but also because Hollande failed to support her for reasons which diplomats said remain obscure.

She said on Thursday she was not putting herself forwards as a candidate.

Diplomats said eastern objections to Mogherini would subside if Tusk, whose country has led the drive for tougher sanctions against Moscow alongside Britain, got the senior job.

The sense of broad support for a Tusk-Mogherini ticket is based on telephone conversations between officials in Brussels and EU leaders, potentially allowing Van Rompuy to propose the pair on Saturday, officials and diplomats said.

Former Latvian Prime Minister Valdis Dombrovskis was the likely fallback candidate if Tusk stumbles or pulls out, the sources said. Former Estonian premier Andrus Ansip was also on the shortlist if the leaders want to give one of the posts to a member of the small liberal political family, they said.

Getting a balance of representation among the 28 EU countries, between male and female and among political groups is a delicate business that proved too much for leaders in July.

Another failure would delay allocating key posts in the European Commission, the EU executive, and send a bad signal at a time when the euro zone is facing economic stagnation and the crisis in Ukraine has severely strained relations with Russia, the EU's main energy supplier.

A source familiar with French government thinking said Hollande had dropped traditional French objections to giving the council presidency to a candidate from a country that is not a member of the euro zone. Indeed, having Tusk at the helm could help hasten Poland's entry into the currency area.

"France will not block Tusk," the source said. "Hollande has build good relations with him and they have done several deals together."

Opponents of the 41-year-old Mogherini have not found a consensus figure to challenge her as the front-runner, while as a woman, she also helps meet European Parliament demands that more senior posts in EU institutions go to female candidates.

Juncker, who won parliamentary endorsement in July to head the Commission that proposes and enforces laws for 500 million Europeans, is expected to announce his full team next week from candidates put forward by governments.

Juncker has been frustrated that so many capitals have nominated men for Commission jobs. He said this week that a Commission without sufficient women would be "less legitimate and hardly representative" and that he would have to compensate by giving women more important posts.

The European Parliament, which must approve the choices for the top jobs, also wants to see more women in EU jobs and its president, Martin Schulz, warned in July that the EU legislature "will not accept a gentlemen's club."