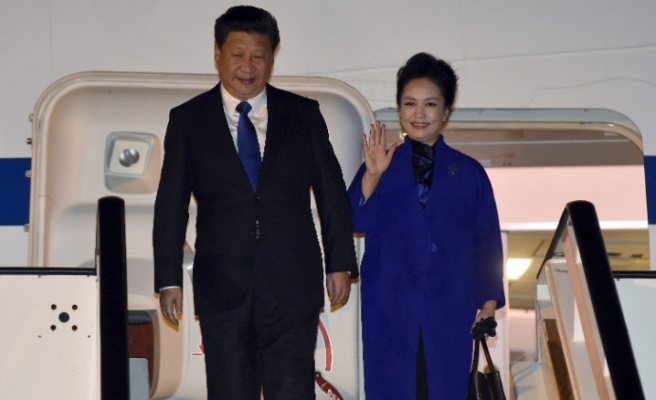 But there will be plenty of time to talk business.

Cameron's office said the visit will secure trade and investment deals worth more than £30 billion (40 billion euros, $45 billion) and lead to the creation of more than 3,900 jobs.

However, the announcement later by Indian steelmaking giant Tata that nearly 1,200 jobs will be lost at steel plants in England and Scotland, coupled with the loss of 2,200 jobs in the industry last week, has given fuel to those opposed to closer trading ties with China.

Tata blamed the job losses on the dumping of cheap Chinese steel on the world market.

Despite the lavish reception which both sides say heralds a "golden era", some fear that the desire for Chinese investment in Britain means Cameron will not press Xi hard enough on human rights.

Groups including Amnesty International and Free Tibet are planning protests throughout the state visit, starting with one during the carriage procession through central London on Tuesday.

Dozens of protesters rallied at the start of the event, waving the Tibetan flag and holding placards reading: "End the Crackdown" and "Cameron: Don't Trade Away Human Rights".

But they were outnumbered by thousands of pro-Chinese demonstrators sporting hats, T-shirts and flags.

They watched on as dragon dancers and musicians created a carnival atmosphere on the Mall, the wide road leading to Buckingham Palace.

Cameron heralded the visit as "a very important moment for British-Chinese relations," but promised to address the protesters' concerns.

His spokeswoman told reporters Monday that "nothing is off the table" and insisted that he would raise human rights with Xi.

"By developing a strong and engaged relationship with China based on an approach of constructive engagement, that means we are able to talk to them about issues where we might differ," she said.

Prince Charles and wife Camilla officially kicked off the visit when they picked up the president at the Mandarin Oriental Hotel before taking tea.

Charles, heir to the throne and a supporter of Tibet's exiled spiritual leader the Dalai Lama, will not attend Tuesday night's state banquet.

Britain says the visit will lead to commercial deals in a range of sectors including financial services and energy, open up export opportunities for British business and draw investment in infrastructure projects.

Following criticism from Labour over the steel industry crisis, Cameron promised to take the issue up with Xi during their talks.

Britain's courtship of China is being masterminded by finance minister George Osborne, Cameron's closest ally and a favourite to succeed him as prime minister, who spent five days in China last month.

While Britain's economy is growing, Osborne is currently implementing a package of austerity measures as he seeks to reduce a record deficit.

The visit comes amid increasing evidence that China's economy, the world's second-largest, is slowing down.

Official figures Monday showed it grew 6.9 percent in the third quarter of this year -- its slowest pace since 2009.

The Chinese-British relationship has been rehabilitated since Cameron met the Dalai Lama in 2012, sparking an angry response from Beijing.