Pope Benedict apologised to victims of sexual abuse, saying paedophile priests had brought "shame and humiliation" on him and the entire Roman Catholic Church. 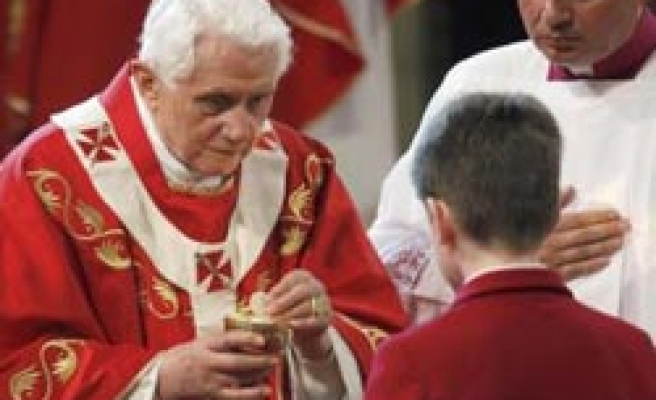 Pope Benedict apologised to victims of sexual abuse on Saturday, saying paedophile priests had brought "shame and humiliation" on him and the entire Roman Catholic Church.

At the start of his third day in Britain, the pope celebrated a Mass for some 2,000 people in Westminster Cathedral, the mother church for Roman Catholics in England and Wales and a symbol of the struggle of Catholics to assert their rights after the Reformation.

It was the 83-year-old pontiff's latest attempt to come to grips with the scandal that has rocked the 1.1 billion-member Church, particularly in Europe and the United States.

A crowd of thousands, the largest of the trip so far, began a march from Hyde Park to Downing Street, the prime minister's official residence, to protest the visit.

"I think of the immense suffering caused by the abuse of children, especially within the Church and by her ministers. Above all, I express my deep sorrow to the innocent victims of these unspeakable crimes ...," he said in his sermon in the towering cathedral built in the late 19th century.

"I also acknowledge with you the shame and humiliation that all of us have suffered because of these sins," he said, adding that he hoped "this chastisement" would contribute to the healing of the victims and the purification of the Church.

He has apologized before for sexual abuse by priests and has acknowledged that the Church was slow to deal with the problem. But his comments on Saturday were among his most direct.

Still, victims groups said they were not satisfied, with one named Bishops Accountability calling it "public relations not penitence."

Another group, SNAP, said: That's what we find so painful and inexplicable -- why, if the pope feels so much remorse, won't he take action? Vulnerable kids need predator priests removed. Wounded victims need corrupt bishops exposed. That's what matters. That's what the Pope won't do."

It was during Harman's tenure as a minister in the previous Labour government that the pope condemned an equality bill going through parliament that would have forced churches to hire homosexuals or transsexuals. The provision was later defeated.

Clegg is a professed atheist but is married to a Spanish Roman Catholic who is raising their children in the Church.

On Friday, anti-terrorism police, on high alert for the pope's visit, arrested six men in London on suspicion of preparing an attack.

British broadcaster Sky cited unnamed sources as saying the six were Algerian but police said they could not comment on the report and the Algerian embassy said it had not been notified of the arrests of any of its nationals.

Police, who also searched eight homes and two businesses in London, reviewed security arrangements after the arrests but decided they remained appropriate.

The BBC reported that the men had posed "a possible threat to the pope" but police refused to confirm or deny that. The Vatican said the trip would go ahead as planned.

After visiting a Catholic home for the elderly, the pope concludes his last day in London by presiding at a prayer service expected to draw some 85,000 people in Hyde Park.

He will spend his last day in Britain on Sunday in Birmingham, where he will beatify Cardinal John Henry Newman, one of the most prominent English converts from Anglicanism to Catholicism.

Newman, who lived from 1801 to 1890 and became a Catholic in 1845, was a central figure in the Oxford Movement, which tried to move the Church of England closer to Rome. He is revered in both the Roman Catholic and Anglican Churches.