At least 13 Ukrainian military personnel had been killed on Friday. 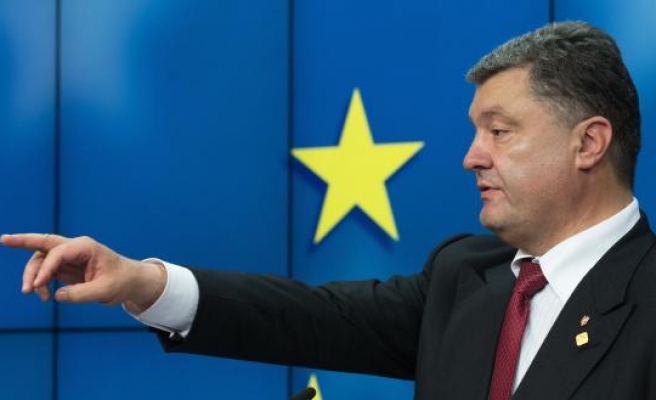 Ukrainian President Petro Poroshenko on Saturday ordered the army to raise the national flag in the separatist stronghold of Slaviansk, eastern Ukraine, after hearing reports of military successes there, the presidential website said.

Poroshenko's website said the newly appointed head of the armed forces general staff had told him separatist fighters came under mortar fire as they tried to break through government forces' lines. The separatists had lost one tank and other armoured vehicles.

"The President gave the order ... for the state flag to be raised on Slaviansk's town council offices," the website said, referring to one of the main buildings where the rebels had been based.

Pro-Russian separatists in eastern Ukraine were forced to leave positions along their northern front by a government offensive, a leader of the self-proclaimed Donetsk People's Republic was quoted as saying on Saturday by news agency Interfax.

"The punitive forces of Ukraine ... moved into a large-scale offensive," separatist leader Aleksandr Borodai was quoted as saying.

"Given the disproportionate numerical superiority of the enemy troops, units of the armed forces of the Donetsk People's Republic were forced to leave their previous positions on the northern sector of the front and go to pre-prepared (positions)," he said.

Ukraine has proposed a time and a place for talks on Saturday on reaching a durable ceasefire with pro-Russian rebels and is awaiting a reply, the president's website said, as fighting in the east killed 13 servicemen.

The website did not name the venue but a Western diplomat expected the talks to be held again in eastern Ukraine's major industrial hub of Donetsk, where the rebels control key points.

In some of the worst violence since President Petro Poroshenko called off a 10-day unilateral ceasefire on June 30, Ukraine's "anti-terrorist operation" (ATO) headquarters said at least 13 Ukrainian military personnel had been killed on Friday.

More than 200 people on the government side have been killed, as well as hundreds of civilians and rebels, in more than two months of fighting in Russian-speaking eastern regions that want to quit Ukraine and join Russia.

Kiev said Ukrainian military personnel had sustained losses from sniper fire on its position near the rebel stronghold and flashpoint city of Slaviansk, where shelling has left roads pockmarked and buildings damaged and burnt out.

ATO headquarters said on Friday it had regained control of the nearby village of Mykolayivka after heavy fighting.

"In the course of the operation, a large number of terrorists were taken prisoner and a significant arsenal of various weapons were taken," a statement on Facebook said.

Slaviansk, a city of 130,000, and surrounding villages have been the main focus of Ukraine's military drive to force out fighters loyal to rebel commander Igor Strelkov, a Muscovite.

Strelkov made an impassioned appeal to Russia on Friday, warning on a rebel website that without Moscow's help the entire region the rebels lay claim to, known as Novorossiya (New Russia), would fall to Kiev's forces.

"Slaviansk will fall earlier than the rest," he wrote.

Russia's foreign ministry accused Ukraine of endangering innocent civilians in the region. "We call on the Ukrainian authorities to cease firing on civilian targets and residential areas," it said.