Ukrainian President Petro Poroshenko, condemning Russian intervention in his country, said that there were now thousands of foreign troops and hundreds of foreign tanks in Ukraine. 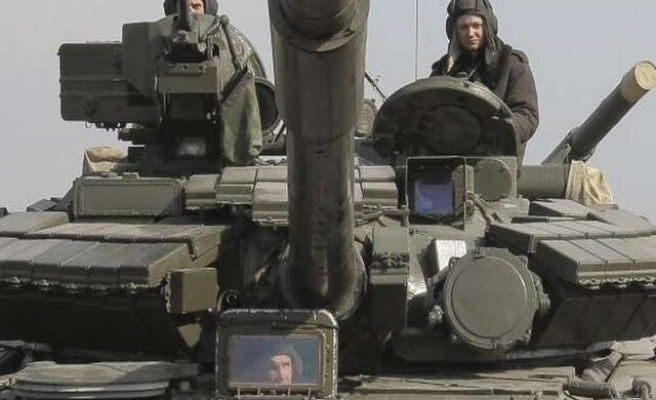 European Union leaders are likely to threaten Russia with new sanctions over Ukraine on Saturday but, fearful of a new Cold War and self-inflicted harm on their own economies, should give Moscow another chance to make peace.

At a summit in Brussels that may hand one of the Union's top jobs to Poland's premier and give hawkish Kremlin critics in ex-communist Eastern Europe new influence in the bloc, EU officials gave Ukraine's embattled President Petro Poroshenko a warm welcome and assurances of further economic and other support.

But divisions among the 28 EU nations have hampered action against Moscow, and officials expect a decision on Saturday only to ask the bloc's executive arm to prepare more options for sanctions.

Large Western countries are wary of damaging their own economies. Those include Germany, Britain and France, as well as Italy, which is heavily dependent on Russian gas and expects to secure the post of EU foreign affairs chief.

Poroshenko gave short shrift to Moscow denials by denouncing the past week's incursion of thousands of troops with hundreds of armoured vehicles and said he expected the summit to order the European Commission to prepare a new set of sanctions.

But, like Commission President Jose Manuel Barroso, he used their joint news conference to stress a will to find a political solution to a crisis that Russian President Vladimir Putin blames on Kiev's drive to turn the ex-Soviet state away from Moscow influence, into a Western alliance with the EU and NATO.

With Ukrainian forces battling pro-Russian separatists and, apparently, Russian troops, he said he was not looking for foreign military intervention and that he was expecting progress toward peace as early as Monday - because failure could push the conflict to a point of no return: "Let's not try to spark the new flame of war in Europe," Poroshenko said.

Barroso also warned of the risk of a "point of no return" in stressing that EU leaders wanted to defuse the confrontation with their nuclear-armed neighbour.

"It makes no sense to have ... a new Cold War," Barroso said. Further conflict would hurt all of Europe, he said, adding that sanctions were meant only to push Moscow to talk.

He highlighted economic support for Ukraine and also plans for negotiations with Moscow and Kiev aimed at ensuring Russian gas continues to flow through Ukraine to the West this winter.

Poroshenko also met Herman Van Rompuy, president of the European Council whose replacement is due to be decided at the summit, starting at 5 p.m. (1500 GMT).

Many officials in Brussels expect a deal that will balance the interests of left- and right-wing factions across the bloc, eastern and western states, northern Europe and the south, as well as satisfy pressure for more women in senior EU roles.

In overall charge of the executive Commission, in succession to Barroso, will be conservative former Luxembourg premier Jean-Claude Juncker, appointed at a stormy summit two months ago.

Eastern leaders, alarmed by a resurgent Moscow, had resisted the appointment of Mogherini at that time. At 41 and in government only since February, they saw her lacking the political experience and weight to stand up to the Kremlin and also handicapped by Italy's dependence on Russian energy.

However, the emergence of support for Tusk as president appears to have forged the makings of a consensus, diplomats and officials said. That would rule out Thorning-Schmidt - who like Tusk has never publicly declared herself a candidate.

Fellow socialists, meeting earlier on Saturday in Paris at the invitation of French President Francois Hollande, formally endorsed Mogherini for the foreign policy job but took no common position on the Council presidency - an omission that appeared to reflect acceptance of a left-right split on the top jobs between Tusk and Mogherini, at the expense of Thorning-Schmidt.

Van Rompuy, whose responsibility it is to try to find ways for the 28 leaders to reach joint decisions, was in contact with them in the run-up to the summit. But a final agreement is unlikely to emerge until they meet in person later on Saturday.

Other elements in striking a deal on the top jobs will be understandings reached on further key roles in the Commission, which will be formed in the coming weeks by Juncker.

His appointment at the last summit in late June followed an acrimonious attempt by British Prime Minister David Cameron to block Juncker, whom London sees as too keen on centralising powers in Brussels - a movement Cameron wants to reverse and over which he has warned that Britain might even quit the Union.

Britain, France, Germany and other countries are competing to see their nominees secure important portfolios in Juncker's team, such as in economic affairs, trade and energy supply.

The horse-trading over jobs underlines the power of rival national governments over the supranational institutions of the EU. Proponents of a strong political leadership in Brussels that can inspire and rally an increasingly sceptical European public behind the common project may again be left disappointed.

Italian Prime Minister Matteo Renzi said on Friday he would propose a meeting on Oct. 6 to discuss ways to tackle the "really worrying" economic situation across Europe, with growth and jobs elusive and fears of a renewed crisis over the euro's survival.

Germany, the leading economic power, has given signs this week of softening its opposition to calls from Italy and France for more leeway to stimulate growth by government spending. The leaders may make statements on the issue on Saturday.