Pro-EU parties ahead in Moldova elections

Pro-Russia Socialist Party taking a surprise lead with 21.5 percent of the vote and the communists, who wish to revise part of a trade deal with the European Union, taking third place with 17.8 percent. 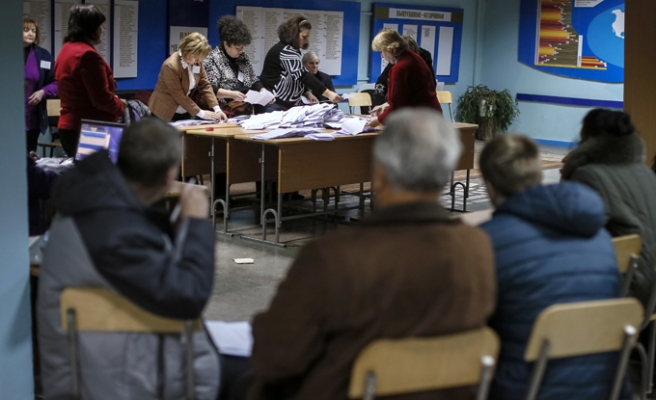 Moldova's pro-Europe parties appeared certain on Monday of being able to form a new coalition to press on with a drive towards the European mainstream after weekend elections, although the pro-Moscow Socialist Party took first place.

With almost all votes counted from Sunday's poll, election authorities said the Liberal Democrats, the Liberals and the Democratic Party had secured a combined vote of 44 percent, enough to win a simple majority in the 101-seat parliament and form a new government team.

But the surprisingly strong showing by the socialists, who campaigned in favour of joining a Russia-led economic bloc rather than moving towards the European Union, took the edge off any jubilation by the pro-Europe lobby.

Socialist leader Igor Dodon said his party would form an oppositon that would make "the European integrationists shake with fear".

The socialists' first place position with a vote of 21.5 percent showed that many in one of Europe's smallest and poorest countries favour preserving traditional close ties with Russia, ex-Soviet Moldova's big provider of energy.

"The main good news is that Moldova will continue its course towards Europe," former parliament speaker Marian Lupu, leader of the Democratic Party and one of the main figures in a three-party coalition that has governed since 2009, said in a televised news conference on Monday.

"The wish of the people to live in peace and integrate with the EU is a basic fundamental for negotiations for a new coalition," Lupu said.

The landlocked country of 3.5 million, wedged between Ukraine and EU member Romania, in July ratified a far-reaching political and trade agreement with the European Union - a move that means turning away from a future in a Russia-led Customs Union as advocated by the socialists.

One tangible benefit for Moldovans from the agreement is visa-free travel to Western Europe.

But Moldovans went into the election aware of the separatist war in neighbouring Ukraine triggered by Kiev embarking on similar pro-Europe policies which set it on a collision course with Moscow.

Moldova's breakaway pro-Russian enclave of Transdniestria gives Russia a potential springboard for action. Though Moscow has so far shown no readiness to intervene as it has in Ukraine, it has nonetheless shown its displeasure by banning imports of wines, vegetables and meat from Moldova, whose economy relies on agricultural exports.

Former Prime Minister Vlad Filat who leads the coalition's Liberal Democrats, speaking at a news conference, dismissed offhandedly the strong performance of the socialists as a "stage directed spectacle ... the result of Russia's Vladimir Putin".

A huge Socialist Party photograph showed Socialist leader Dodon in earnest conversation with Putin. Just a block away, a billboard showed leaders of the coalition Liberals gathered under the emblem of the U.S.-led NATO alliance.

The next weeks will be dominated by back-room bargaining among the parties, almost certainly involving the communists who lay in third place in the vote count, to hammer out a working arrangement in Moldova's notoriously fractious political house.

A government may not emerge until the New Year.

The coalition's poor record of fighting corruption and conducting deep reform, as well as fierce infighting among its leaders, appeared to have cost it support at the ballot-box.

Relations are particularly poor between Filat and former acting president Mihai Ghimpu, leader of the Liberals, and are always likely to put any coalition formed under strain.

Filat, at the news conference, said he had already had initial talks with Lupu on a new coalition and he went on to defend the coalition's record.

"We have come out of it with four-five seats fewer. But if you consider that we have directed the country for five years while a war was going on in eastern Ukraine, plus a global crisis and a Russian embargo, we have not done too badly," he said.