The poll by the Ukrainian Democratic Initiatives Foundation (DIF) suggested that the pro-Poroshenko bloc would win 26.9 percent of the vote 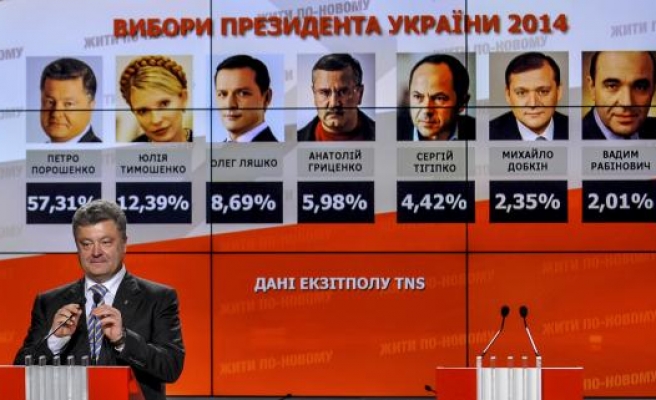 Poroshenko hopes the Oct. 26 vote will give him backing for the tough line he has taken against pro-Russian separatists in eastern Ukraine and an endorsement of his European integration policies that have brought confrontation with Moscow.

The poll by the Ukrainian Democratic Initiatives Foundation (DIF) suggested that the pro-Poroshenko bloc would win 26.9 percent of the vote against just 6.2 percent for the second-placed party, the nationalist Radical Party.

The survey said the party of former Prime Minister Yulia Tymoshenko was in third place with 5.5 percent. Some 33 percent of people remained undecided.

"For the first time in Ukrainian history, a single political party will dominate the parliament," Irina Bekeshkina, the head of the foundation, told a news conference.

Despite appearing headed for victory, the pro-Poroshenko party looked set to take far fewer votes than the president himself won in May, when he came to office after securing support of 54.7 percent in the first round ballot.

Bekeshkina said less people would take part in the election compared with the previous parliamentary campaign in 2012, mostly due to expected lower turnout in the troubled east.

Around 3,000 people were killed in a six-month conflict between Ukrainian government forces and the pro-Russian separatists who seek independence from Kiev. Fighting subsided after a ceasefire took hold on Sept. 5.

Friday's poll suggested that only three political groups were likely to pass the five percent threshold for entry into parliament, although the significant number of undecided voters could eventually help other blocs secure seats.

Allies of former President Viktor Yanukovich, who was ousted from power following mass street protests in February and fled to Russia, dominate the present parliament.