The 39-year-old leader arrived Thursday in the South American territory, which borders northern Brazil, six months after a wave of protests erupted about security problems and unemployment there. 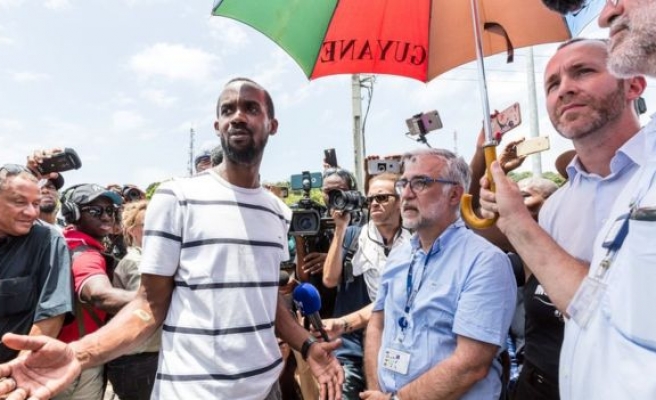 President Emmanuel Macron faced demonstrations on the first day of his trip to the impoverished French territory of Guiana on Thursday where he arrived saying he was not "Father Christmas" bearing gifts from the state.

On Thursday evening, five people were arrested and two police officers were lightly injured in clashes following rallies by local activist groups Pou Lagwiyann dekole (So That Guiana Takes Off) and 500 Freres (500 brothers).

Many locals feel they are overlooked by the government in Paris despite unemployment of 23 percent, massive illegal immigration, pot-holed roads and poor public infrastructure compared with mainland France.

"I am not Father Christmas because the people of Guiana are not children," Macron said as he arrived for the trip in the forested and humid territory which is home to around 250,000 people.

"The state has made too many promises which have not been kept," he added. "So I'm here to tell things as I see them, make commitments that I can keep during my term in office and help provide the authority which is essential on this territory."

The demonstrations in March and April this year during France's presidential election led to a series of strikes and saw protesters briefly occupy the Kourou Space Centre from where European rockets are routinely launched.

The outpouring of anger left the former Socialist government of then-leader Francois Hollande scrambling to provide reassurances and led to promises of two separate aid packages.

In April, the government agreed to an emergency funding package worth one billion euro (1.16 billion dollars) and agreed in principle to invest another 2.1 billion euros over an unspecified timeframe.

"What we need today is that the commitments are honoured," former Socialist prime minister Bernard Cazeneuve, who was in office at the time, told the CNews channel.

Some local activists and officials were angered by Macron's "Father Christmas" comment.

"We don't need Father Christmas, we need a government that realises that in Guiana nothing works," said David Riche, head of an associations of local mayors, told franceinfo radio.

On Friday, Macron is set to visit the space centre along with the head of the European Commission, Jean-Claude Juncker.