Demonstrations spread to a dozen or more major U.S. cities by Tuesday, culminating in at least 400 arrests nationwide. 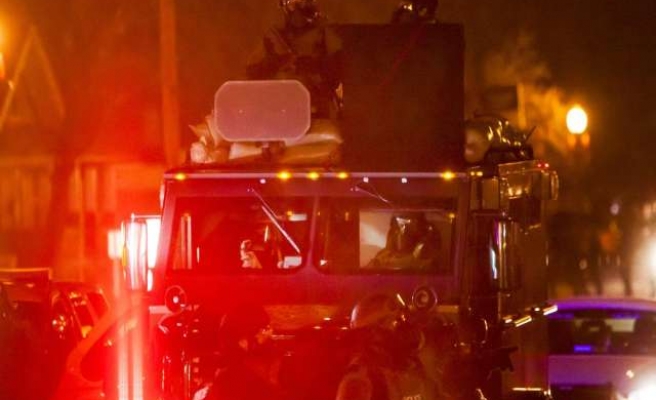 The streets of Ferguson, Missouri, were mostly quiet on Wednesday after two nights of racially charged unrest following a grand jury decision to clear a white policeman of criminal prosecution for the shooting death of an unarmed black teenager.

With wintry weather apparently muffling protests in Ferguson and elsewhere across the Midwest and East Coast on the eve of the Thanksgiving holiday, one of the largest rallies took place in Los Angeles, where several hundred marched through downtown, chanting, "No justice, no peace."

Sympathy demonstrations even spread to London, with CNN airing television footage of young people streaming through what appeared to be a pedestrian walkway and a sign bearing the message: "Black Lives Matter."

Ferguson, a St. Louis suburb of 21,000 residents, erupted in weeks of sometimes violent protests after 18-year-old Michael Brown was slain by officer Darren Wilson on Aug. 9 in a shooting widely perceived in the community as an unjustified use of deadly force.

Wilson, who was placed on administrative leave, has said he acted in self-defense, out of fear for his life.

The town became an epicenter of national outrage again this week, especially among blacks, when a St. Louis County grand jury declined to indict Wilson on criminal charges.

The case has exposed long-running strains in Ferguson between its predominantly black residents and a white-dominated political and law enforcement establishment while renewing a debate about race relations in the United States as a whole.

Tensions in Ferguson, at least on the surface, had diminished considerably by Wednesday night.

A few dozen protesters huddled in falling snow outside police headquarters after dark, in contrast to the hundreds who took to the streets Monday in a night of arson, looting, sporadic gunfire and clashes with police that ended in more than 60 arrests. Another 45 protesters were taken into custody in smaller, more isolated bursts of lawlessness that erupted Tuesday night.

Demonstrations spread to a dozen or more major U.S. cities by Tuesday, culminating in at least 400 arrests nationwide.

Protests around the country dwindled on Wednesday in size and intensity. Perhaps the biggest was in Los Angeles, where police arrested more than 50 marchers for disobeying orders to disperse after intermittently blocking traffic downtown.

In San Diego, about 300 protesters with a heavy police escort marched peacefully through the City Heights district chanting, "Ferguson, we've got your back!"

By contrast, at least 200 protesters raced through streets in Oakland, California, spraying walls, billboards and bus stops with graffiti and smashing storefront windows, before they were confronted by police in a public plaza adjacent to City Hall.

About 70 demonstrators marched through Atlanta, and a day after a massive rally filled New York's Times Square, about a dozen protesters gathered in Union Square on Wednesday night, blaming rain for their low turnout.

In and around Ferguson itself, some 2,200 National Guard troops called out by Missouri Governor Jay Nixon were backing up local police.

"The ramped-up presence and action of the Missouri National Guard has been helpful," Nixon said on Wednesday after facing criticism for not deploying enough troops in the immediate hours after the grand jury's decision was announced Monday evening.

About a half-dozen clergy members, wearing orange vests, also milled about on Wednesday night among the protesters, most of whom stood quietly in the snow, as passing motorists occasionally honked their horns in support.

Tensions between police and black Americans have simmered for decades, with many blacks feeling the U.S. legal system and law enforcement authorities do not treat them fairly.

In Washington, President Barack Obama has tried to keep a lid on the anger. He remained cautious in his comments in the immediate aftermath of the Ferguson shooting, but has been more expansive in recent days including remarks at the White House after the grand jury's decision. On Monday he said deep distrust exists between police and minorities and that "communities of color aren't just making these problems up."

St. Louis police said three people were arrested at a protest near City Hall on Wednesday in which activists staged a mock trial of Wilson.

Ferguson's 21,000 population is mixed, with 63 percent of the residents African-American and 34 percent white, according to 2010 U.S. Census data. Ferguson's mayor, James Knowles, is white, as are most of its city council members.

A 2013 state attorney general's report found more than 85 percent of motorists pulled over in the city are black, and the arrest rate among blacks is twice that among white residents.

The Justice Department has been investigating whether to bring federal civil rights charges against Wilson and the Ferguson police department.

"The sad fact is that it brings up issues that we've been struggling with in this country for a long, long time," said Matthew Green, an associate professor of politics at the Catholic University of America. "These are not problems and issues that are going to get resolved by one president in the remainder of his term."