'I am hoping that all the efforts we've made over the past years to build our ties will serve a good basis for further steps,' Russian president says 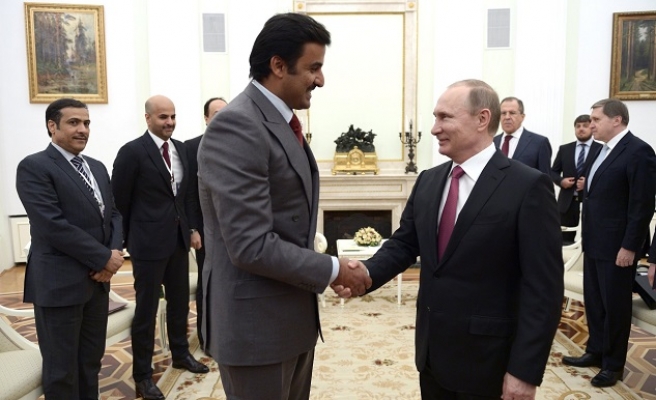 President Vladimir Putin and the Emir of Qatar on Monday discussed the Syrian crisis, as global powers seek to push the warring sides towards the negotiating table.

"Russia plays a main role when it comes to stability in the world," Sheikh Tamim bin Hamad al-Thani said at the start of the meeting at the Kremlin.

"We very much want to develop relations with Russia and find a solution to a number of problems related to stability in some countries of our region," he added in translated remarks released by the Kremlin.

Russian Foreign Minister Sergei Lavrov said both Moscow and Doha were expecting that, in accordance with a UN-backed plan, talks between the Syrian government and the opposition would begin "in the nearest future, already this month."

Global powers are seeking to push the Syrian regime and opposition to the negotiating table in a bid to end the nearly five-year war that has cost the lives of 260,000 people.

The UN-backed plan foresees talks between the various sides starting on January 25, the establishment of a transitional government within six months and elections within 18 months.

Lavrov said Russia and Qatar had also agreed to step up measures to battle terrorism.

"Concrete steps that can facilitate this have been agreed," he said in televised remarks, without elaborating.

The two countries also agreed to ramp up economic cooperation, with Putin telling Sheikh Tamim that Russia is keen to coordinate efforts in energy, "especially in the gas sphere."

"I am hoping that all the efforts we've made over the past years to build our ties will serve a good basis for further steps," Putin said.

"Investment cooperation is deemed to be very important," the Qatari ruler said for his part.

Amid persisting tensions with the West over the Ukraine crisis, Russia has over the past few years has sought to forge closer ties with Middle East powers including Qatar.