Putin underline the importance of media in stirring patriotic sentiment over Ukraine. 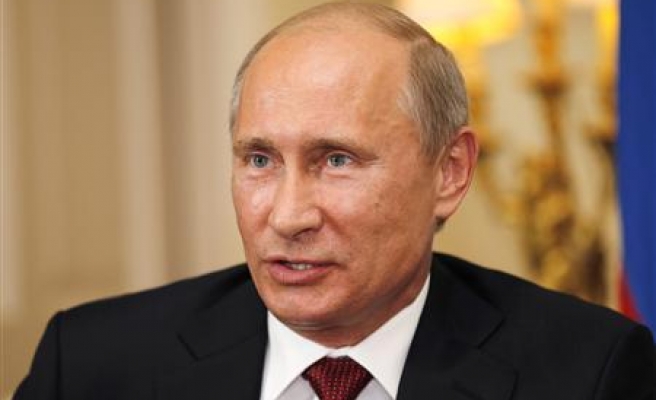 Four weeks after Russia annexed Crimea to great fanfare, President Vladimir Putin quietly signed a decree honouring more than 300 journalists for their "objective coverage" of the region's seizure from Ukraine.

The awards made under decree 279 to television, radio and newspapers loyal to Putin underline the importance of media in stirring patriotic sentiment over Ukraine. However, the decree's initial secrecy suggests Putin wishes to distance himself from the powerful Kremlin policy tool of the media onslaught.

In the official gazette, there was a gap between decrees 278 and 280. Decree 279 remained unexplained until a Russian newspaper reported its contents on Monday, a fortnight after the event, offering a glimpse into how sensitive the use of propaganda has become in the East-West standoff over Ukraine.

A Kremlin source, confirming that Putin signed the decree making the awards on April 22, said only: "It was for internal use, not for public use."

To an outside observer, the propaganda war seems to have reached such a scale that it is all but impossible for Russians or Ukrainians to discover what is really going on from their national media.

Many events are seen through a mist of disinformation or just confusion, a situation that suits Putin in what his critics believe is his attempt to undermine the Ukrainian authorities by portraying them as unable to control the country.

The veracity of events is increasingly hard to check. When Russian media reported heavy fighting in the town of Kramatorsk this weekend, Reuters journalists on the scene shortly afterwards found a sleepy town with no evidence of clashes.

Russian media deny they are part of a propaganda campaign and accuse Western journalists of bias, a charge that has found fertile ground in eastern Ukraine where some reporters have already been taken hostage or beaten.

The Facebook page of Pavel Gubarev, a detained pro-Russian protest leader, has described journalists as "catalysts of intolerance, hatred and violence".

As on other fronts, the media fight between Moscow and Kiev is mis-matched.

Russia's well-organised and well-financed state media have portrayed events in a style reminiscent of the Soviet era, peppering their reports with the message that Ukrainians, as during World War Two, may be cooperating with fascists.

By contrast, Ukraine's fragmented media lack the single mindedness to answer the charges, remaining poorly financed and usually controlled by business tycoons who have been reluctant to offend business partners in Russia.

Now largely switched off in the separatist-held regions in its east, Ukrainian television has so far failed to make the case for Kiev's new pro-Western leaders that pro-Russian rebels are in the pay of the Kremlin.

That has been left to the Internet, where a war of words is raging as Ukraine prepares for three events: a May 25 presidential election, a May 11 referendum on independence in the eastern Donetsk and Luhansk regions, and Friday's anniversary of victory over Nazi Germany in World War Two.

All are possible flashpoints in a crisis where Russia could use clashes to justify an invasion of eastern Ukraine - which Putin has reserved the right to stage if he believes compatriots and Russian speakers need his protection.

Several Russian newspapers used the same photo on Monday on their front page. This showed a man with flames licking up his sleeve as he throws a Molotov Cocktail into the burning trade union building in the Ukrainian city of Odessa, where dozens of pro-Russian separatists died after street fighting.

Some Russian media likened the blaze to a World War Two Nazi massacre when all the residents of a Belarussian village were burnt alive.

Ukraine's acting president, Oleksander Turchinov, tried to win back the initiative at the weekend, using his strongest language yet to condemn Russia for "waging war against our country", but lacking support his words failed to catch on.

Other allegations by officials that only drunks and drug addicts follow the pro-Russians have also fallen flat, leaving it to Ukraine's bloggers to vent the widespread frustration with not only the pro-Russians but with their new leaders as well.

"At the time of war, everyone lies," said a post on the "Odessa on fire" website, trying to defuse bitter debate over who was responsible for the more than 40 deaths on Friday. Such comment shows the depth of emotion as a struggle for influence in Ukraine threatens to tip the country into civil war.

But while much of the Ukrainian blogosphere undermines their leaders, Russian media coverage is helping to boost support for Putin, whose ratings last week hit 82 percent - the highest since 2010.

"Putin played a brilliant hand," said one post on a site called "For Putin - For a Great Russia", celebrating his moves to protect the economy from Western sanctions over Ukraine.

"Putin has fooled the European Union and America and wasn't it great? Before the eyes of the whole world, he played them like a violin."