The statement by Patriarch Filaret, entitled "New Cain", was released on the first full day of a ceasefire between Ukrainian forces and pro-Russian rebels. 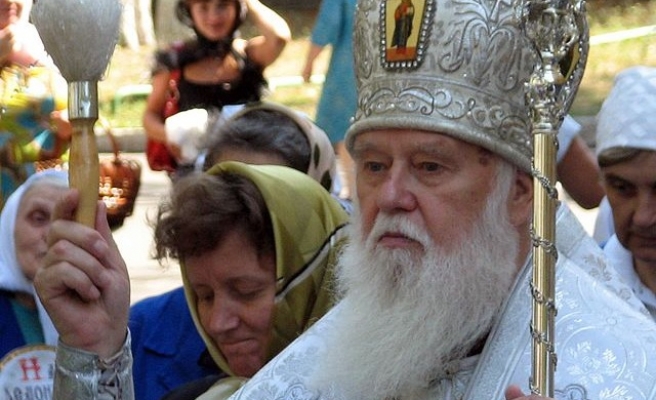 President Vladimir Putin has fallen under the spell of Satan and faces eternal damnation unless he repents, a top Ukrainian clergyman said on Saturday in an unusually blunt statement that squarely blamed the Russian leader for the war in Ukraine.

Patriarch Filaret heads the Kiev Patriarchate, a branch of the Orthodox Church that broke away from Moscow in 1992 after the fall of the Soviet Union and the declaration of an independent Ukraine.

His church, a rival of the Moscow Patriarchate which is closely linked to Putin, strongly supports Ukrainian nationhood and the Kiev government's struggle to defeat pro-Russian separatists in eastern Ukraine.

"With great regret I must now say publicly that among the rulers of this world ... there has appeared a new Cain, not by his name but by his deeds," Patriarch Filaret said, invoking the Biblical character who killed his brother Abel.

"Like the first fratricide of history Cain, these deeds show that the afore-mentioned ruler has fallen under the action of Satan," he said in the statement, published on the patriarchate's website in Ukrainian, Russian and English.

The statement, entitled "New Cain", was released on the first full day of a ceasefire between Ukrainian forces and pro-Russian rebels. At least 2,600 people have died in fighting in eastern Ukraine since it erupted in April.

Putin is a baptised Orthodox Christian and has forged close ties with Russia's Orthodox Church, seeing it as a valuable ally in his battle with what he sees as a decadent Western world.

Filaret, who recently took over the Kiev patriarchate, said Putin had deliberately stoked the conflict in Ukraine by sending mercenaries, troops and weapons across the border and had spread lies via Russia's mass media about what was really happening.

Putin denies sending Russian troops into Ukraine or arming the separatists, despite what Kiev and its Western backers say is overwhelming evidence to the contrary.

"This ruler is cynically lying, saying his country is not a party to the conflict in Ukraine, though he did everything in order to foment the conflict and maintain it," said Filaret.

"He calls himself a brother to the Ukrainian people, but in fact according to his deeds, he has really become the new Cain, shedding the brotherly blood and entangling the whole world with lies," Filaret said.

Filaret urged the Orthodox faithful to pray that Putin would "come to his senses". Otherwise, the patriarch added, he would face "an ignominious end and eternal damnation in hell".