Putin: Russia ready to use all options in Crimea-UPDATED-3

The former KGB spy also told reporters there was no need to use force in Ukraine's southern Crimea region at the moment, but Russia reserved the right to do so as a "last resort". 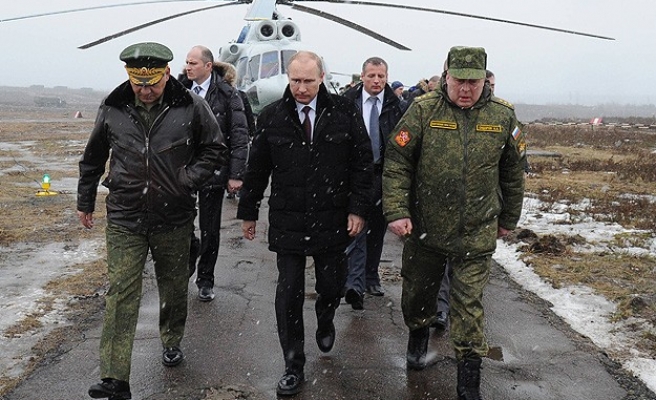 President Vladimir Putin said on Tuesday that Russia would only use military force in Ukraine as a last resort, in remarks apparently intended to ease East-West tension over fears of war in the former Soviet republic.

Russia however reserved the right to use all options in Ukraine to protect its compatriots there who were living in "terror", Putin said. His comments lifted Russian bond markets after a panic sell-off on Monday.

While Putin said sanctions being considered against Russia would be counter-productive, a senior U.S. official said Washington was ready to impose them in days rather than weeks.

U.S. Secretary of State John Kerry arrived in Kiev and announced an economic package and technical assistance for Ukraine in a show of support for its new government.

Putin said there had been an unconstitutional coup in Ukraine and ousted leader Viktor Yanukovich, an ally of Russia, was still the legitimate leader of the country despite giving up all power.

Last month's ousting of Yanukovich after months of street protests in Kiev and Russia's bloodless seizure of Ukraine's Crimea region prompted a confrontation between Moscow and the West widely seen as the most serious since the end of the Cold War. The West has been alarmed at the possibility that Russia might also move into eastern and southern Ukraine, home to many Russian speakers.

"There can be only one assessment of what happened in Kiev, in Ukraine in general. This was an anti-constitutional coup and the armed seizure of power," said Putin, looking relaxed as he sat before a small group of reporters at his residence near Moscow.

"As for bringing in forces. For now there is no such need but such a possibility exists," he said. "What could serve as a reason to use military force? It would naturally be the last resort, absolutely the last."

Earlier on Tuesday, Putin ordered troops involved in a military exercise in western Russia, close to the border with Ukraine, back to their bases. He said armed men who had seized buildings and other facilities in Crimea were local groups.

Russia had paid a heavy financial price on Monday for its military intervention in Ukraine, with the Moscow stock market falling more than 10 percent, wiping nearly $60 billion off the value of Russian firms.

Kerry's visit to Kiev comes as Washington and its Western allies step up pressure on Moscow to withdraw its troops from Crimea or face economic sanctions and diplomatic isolation.

A senior U.S. administration official, who briefed reporters en route to Kiev, said Washington would work with Congress to approve $1 billion in loan guarantees to help lessen the impact on Ukrainians of proposed energy subsidy cuts.

NATO allies will hold emergency talks on the crisis on Tuesday, for the second time in three days.

In further pressure on Kiev, Russia's top gas producer Gazprom said it would remove a discount on gas prices for Ukraine from April, Interfax news agency cited the company's chief as saying on Tuesday.

Putin said at the weekend that he had the right to invade Ukraine to protect Russian interests and citizens after Yanukovich's downfall following months of popular unrest. Russia's Black Sea Fleet has a base in Crimea.

But the military exercises in central and western Russia, which began last week and raised fears that Russia might send forces to Russian-speaking regions of east Ukraine, were completed on schedule.

Although the end of the exercises had been planned, the announcement sent a more conciliatory message than much of the rhetoric from Russian officials, who say Moscow must defend national interests and those of compatriots in Ukraine.

Putin is dismayed that the new leadership in Ukraine, the cradle of Russian civilisation, has plotted a course towards the European Union and away from what had been Moscow's sphere of influence during generations of Soviet Communist rule.

Moscow's U.N. envoy told a stormy meeting of the Security Council that Yanukovich had sent a letter to Putin requesting he use Russia's military to restore law and order in Ukraine.

Ukraine said observers from the Organization for Security and Cooperation in Europe, a pan-European security body, would travel at its invitation to Crimea in an attempt to defuse the military standoff there.

The United States has begun spelling out its response to Russia's incursion, announcing a suspension of all military engagements with Russia, including military exercises and port visits, and freezing trade and investment talks with Moscow.

"Over time this will be a costly proposition for Russia," Obama told reporters.

The State Department said the United States was preparing to impose sanctions on Russia, although no decisions had yet been made.

Members of the U.S. Congress are looking at options including sanctions on Russia's banks and freezing assets of Russian public institutions and private investors, but they said they wanted European states to step up their involvement.

A Kremlin aide said that if the United States did impose sanctions, Moscow might drop the dollar as a reserve currency and refuse to repay loans to U.S. banks.

An International Monetary Fund mission is in Kiev to discuss financial assistance for Ukraine to help it avoid bankruptcy. Kiev's new leaders want a financial package worth at least $15 billion, with a quick release of some of the cash.

The European Union has threatened unspecified "targeted measures" unless Russia returns its forces to their bases and opens talks with Ukraine's new government.

Western leaders have sent a barrage of warnings to Putin against armed action, threatening economic and diplomatic consequences, but are not considering a military response.

There was no immediate sign of any new movements by Russian forces in Crimea overnight although Ukraine's acting president said on Monday that Russia's military presence on the Black Sea peninsula was growing.

Ukrainian officials said Russia was building up armour on its side of the 4.5-km (2.7-mile) wide Kerch strait between the Crimean peninsula and southern Russia.

Russian forces shipped three truckloads of troops by ferry into Crimea after taking control of the border post on the Ukrainian side, Ukraine's border guards spokesman said.

Vladimir, a 50-year-old cab driver from Kerch, said people do not want the Russians to leave.

"When they are here, it is safer," he said, voicing the opinions of some in the region who fear a return to the chaos in Ukraine after the collapse of the Soviet Union.

EU foreign ministers held out the threat of sanctions if Moscow fails to withdraw its troops from Ukraine, while offering to mediate, alongside other international bodies. EU leaders will hold an emergency summit on Thursday.

Russian President Viladimir Putin's decision to withdraw troops back to it is bases is a positive step, Turkey's Minister for EU Affairs and Chief negotiator said on Tuesday.

"I hope Russia’s withdrawal will be maintained and that Ukraine's territorial integrity will be respected. We expect the EU to show the same respect," Mevlut Cavusoglu told reporters during his meeting with the Ukrainian Ambassador to Turkey, Sergiy Korsunsky.

The minister said that both the EU and Russia will put pressure on Ukraine to choose one side.

"Ukraine both needs the West and the EU standards, we well as Russia’s gas and oil," Cavusoglu said. "Turkey will do what is required as the strategic partner of both Russia and Ukraine. We hope Ukraine's stability, economic development and territorial integrity will not be imperiled."

Tension has grown high in Crimea since Ukraine was hit by large-scale protests after Yanukovych refused to sign a deal with Russia in favor of closer ties with the EU that led to the ousting of the former president.

Russian troops in Crimea reportedly fired warning shots at Ukrainian soldiers as they marched towards the Belbek base.

It has been revealed that the shots were fired shortly after the deadline for Ukrainian soldiers in Crimea to surrender to Russian forces passed this morning.

However, Russia denied having set the deadline as part of an ultimatum.