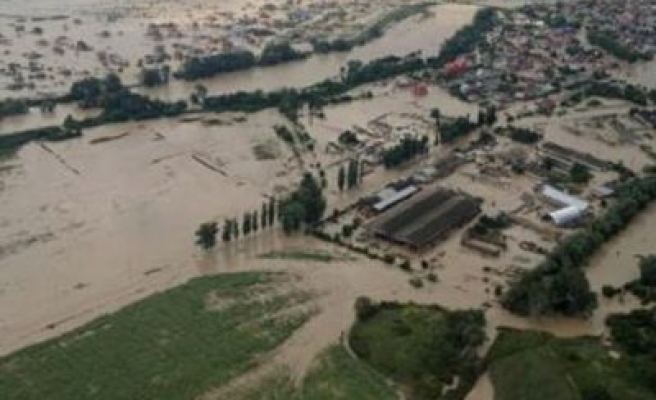 Russian President Vladimir Putin ordered investigators to find out whether local officials could have done more to prevent floods killing 150 people in southern Russia after flying to the region to handle the first big disaster of his new presidency.

Putin, who was criticised for his slow reaction to disasters earlier in his career, has promised money for new homes for victims of the worst flooding in decades in Krasnodar, a prosperous region with thriving agriculture and tourism.

He declared Monday a day of mourning for the dead, most of whom drowned. Many were elderly people caught unawares as they slept when water swept through their homes after two months' average rainfall fell in a night.

"I have asked the leadership of the (federal) Investigative Committee to come down," Putin said late on Saturday during a meeting with officials in Krymsk, the worst-hit town.

Police said survivors climbed into trees and onto roofs to stay above the waters, which flooded entire ground floors of some buildings and created driving torrents in some streets.

Almost 30,000 homes were also without electricity and gas in a region that is Russia's traditional "bread basket", emergency officials said.

In Krymsk, where 139 people died, residents were without drinking water and the Health Ministry, concerned about potential infection from a local cemetery eroded by floodwaters, began vaccinating residents. Rains continued there on Sunday.

But the sun was shining and the waters had receded from the resort town of Gelendzhik, on the Black Sea coast, where nine people were killed. The town had appeared badly flooded in aerial photographs taken on Saturday.

Emergencies Ministry aircraft were taking off from Gelendzhik airport, the nearest regional airport to Krymsk.

Most passenger rail traffic resumed on Sunday and Russia's biggest port, Novorossiisk, a major outlet for crude oil from the world's largest producer, resumed normal operations, an official at the port operator said.

Novorossiisk is also a major outlet for wheat from Russia, the world's second largest exporter this past year. The official said Novorossiisk Grain Terminal was ready to resume exports, though none were scheduled for Sunday.

The consequences of the flash flood could be more lasting for Putin, though he moved swiftly to show he was on top of the rescue effort.

On Saturday, Putin and the regional governor surveyed the flood zone from a helicopter and bumped over a country road in a minibus with the head of the Krymsk district, discussing the disaster response in the town worst hit by the flooding.

A criminal investigation was opened into whether the deaths were caused by negligence, Russian media reported.

It was the first major disaster in Russia since he returned to the Kremlin for a third term as president after a four-year interlude as prime minister.

The former KGB spy, now 59, has increasingly struggled to project his customary image of mastery since the outbreak of protests against his rule last December.

In his 12 years in power, both as president and prime minister, Russia has been plagued by natural and man-made disasters that have laid bare a longstanding shortfall in investment and management of Russia's transport and infrastructure.

These include deadly forest fires in 2010 and the sinking of the Kursk nuclear submarine in 2000 which killed 118 sailors and officers. Putin was accused of responding slowly to the Kursk disaster because attempts by foreign rescue teams to save the sailors were initially not allowed.

Putin on Saturday ordered the Emergencies Ministry to check a reservoir near Krymsk.

The state water resource agency has rejected suggestions by residents that a release of water from a nearby reservoir was responsible for the severe flooding in Krymsk.