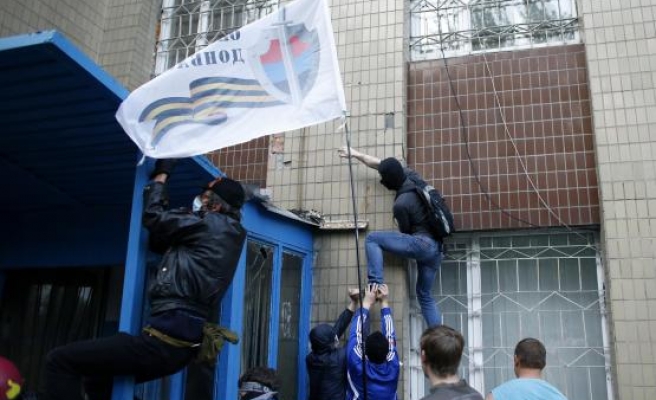 Russian President Vladimir Putin called on pro-Moscow separatists in Ukraine to postpone a vote on secession just five days before it was to be held, potentially pulling Ukraine back from the brink of violent dismemberment.

It was the first sign the Kremlin leader has given that he would not endorse a referendum planned for Sunday by pro-Russian rebels seeking independence for two provinces in the east, and Russian analysts said they believed the rebels would heed Putin's call to put off the vote.

In what could be a breakthrough in the worst crisis between East and West since the Cold War, Putin also announced he was pulling Russian troops back from the Ukrainian border.

NATO, the Pentagon and the White House all said they had seen no signs of a Russian pull-back from the frontier, where Moscow has massed tens of thousands of troops, proclaiming the right to invade Ukraine to protect Russian speakers.

But Putin's comment suggested that any Russian military incursion into eastern Ukraine was off the agenda for now.

"We call on the representatives of southeastern Ukraine, the supporters of the federalisation of the country, to postpone the referendum planned for May 11," Putin said.

He said this would create conditions for dialogue between the Ukrainian authorities in Kiev and the separatists.

NATO Secretary General Anders Fogh Rasmussen said during a visit to Poland: "Russia should live up to its international commitments and stop supporting separatists and scale back troops from the border, so political solutions can be found."

Putin spoke in Moscow after talks with the head of the Organization for Security and Cooperation in Europe, who said the security and rights body would soon propose a "road map" to defuse the Ukraine crisis.

A pro-Russian separatist leader said the separatists would consider Putin's call to postpone their referendum at a meeting of their self-proclaimed People's Assembly on Thursday.

"We have the utmost respect for President Putin. If he considers that necessary, we will of course discuss it," Denis Pushilin told Reuters in Donetsk, a city of 1 million people which the rebels have proclaimed capital of an independent "People's Republic of Donetsk".

The White House said the "illegitimate, illegal" vote should be cancelled rather than postponed.

Since a pro-Russian president was ousted in an uprising in February, Putin has overturned decades of post-Cold War diplomacy by proclaiming the right to send troops to Ukraine and seizing and annexing Crimea.

A rebellion in the east has raised the prospect that Ukraine, a country of around 45 million people the size of France, could be carved up or even descend into civil war, pitting Russian-speaking easterners against pro-European Ukrainian speakers in the West.

Residents in areas held by the pro-Moscow rebels were stunned by Putin's remarks at a time when the region seemed to be hurtling towards inevitable independence and a week of bloodshed had brought animosity towards Kiev to a fever pitch.

"Maybe Putin doesn't understand the situation? There is no way this referendum isn't happening," said Natalia Smoller, a pensioner who has been bringing food to rebels manning a roadblock in Slaviansk, a town turned into a fortified redoubt where fighters withstood a government advance this week.

Nevertheless, experts predicted the separatists would heed Putin's call to stand down for now.

"Among those confronting Ukrainian troops, a certain logic should prevail under which they understand that without the support of Russia and thereby the Russian army, they could be subjected to heavy military strikes," said Yevgeny Minchenko, a political analyst friendly to the Kremlin.

Ukrainian government troops have launched a military campaign to retake territory held by separatists this week. Troops briefly captured the rebel-held city hall in the eastern port of Mariupol overnight, but quickly abandoned it, leaving it back in the hands of the separatists.

Witnesses said the soldiers left after smashing furniture and office equipment. The smell of tear gas hung in the air inside the building which was largely empty in the morning, with activists in gas masks clearing debris.

Pro-Russian activists were rebuilding barricades outside the building where separatist flags flew and patriotic songs blared from loudspeakers.

In a boost for the rebels, one of their leaders, Pavel Gubarev, was released from detention in exchange for three members of the Ukrainian security services, a spokesman for the separatists' military headquarters in Slaviansk said.

The United States and European Union, which have so far imposed limited sanctions Russian individuals and small firms, have threatened to impose much wider sanctions if Moscow takes further steps to interfere in Ukraine. Sunday's planned referendum was seen as a potential trigger.

Moscow has denied Western accusations that it was orchestrating the rebellion in Ukraine's east, where Ukrainian forces have been largely unable to reassert control.

The prospect that further sanctions might be imposed on Moscow has already hurt Russia's economy indirectly by scaring investors into pulling out capital and forcing the central bank to raise interest rates to protect the rouble.

A range of European companies that do business in Russia - as diverse as Italian appliance maker Indesit, Danish brewer Carlsberg, Finnish tyre maker Nokian Tyre and Swedish cosmetics firm Oriflame, announced results on Wednesday that blamed the crisis for hurting their bottom lines.

French bank Societe General wrote down the value of its Russian arm Rosbank by $730 million, blaming the economic uncertainty caused by the Ukraine crisis.