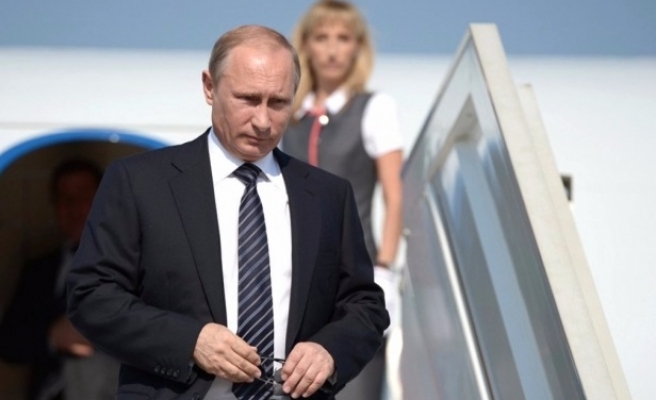 President Vladimir Putin visited occupied Crimea on Friday as Russia marked two years since annexing the Black Sea peninsula from Ukraine in a move that dramatically damaged its ties with the West.

The Kremlin strongman stopped over on the island of Tuzla to oversee progress on a $3-billion (2.66-billion-euro) bridge project connecting Russia to Crimea, a key link that Moscow hopes will further bind it to the isolated region.

Putin said the bridge's construction -- which he called a "historical mission" -- should be completed by December 2018, and that the first direct link to the mainland was essential for bolstering Crimea's struggling economy.

The Russian leader also said an undersea power cable that could reduce the peninsula's electricity dependence on Kyiv could become fully operational in May, a pressing concern after blasts severed power lines from Ukraine last year and left much of Crimea in the dark.

In an address broadcast on national television, Putin congratulated Russians on the annexation's second anniversary and said the bridge between Crimea and Russia would be "yet another symbol of our unity".

"We will confidently move forward together, and only forward," he said.

Meanwhile, state-sponsored concerts and public festivities took place across Russia to commemorate the March 2014 takeover that Moscow insists followed a referendum in which Crimea residents voted overwhelmingly to swap countries.

In Moscow, thousands gathered just off Red Square for a concert featuring pro-Kremlin pop stars including 78-year-old crooner Joseph Kobzon, who was blacklisted by the EU last year after he performed for Russia-backed separatists in eastern Ukraine.

The annexation of Crimea boosted Putin's popularity with state media going into overdrive over a move to reclaim a region many see as Moscow's rightful property.

Ahead of the annexation, Putin sent in thousands of special forces to take control of army bases and government institutions across Crimea after the ouster of a pro-Russian leader by protesters in Kyiv.

Ukraine and the West insist the takeover -- which has not been recognised internationally -- was an illegal landgrab and that the vote to join Russia was a Kremlin-organised farce.

The annexation pushed relations with the West to a new post-Cold War nadir, with Washington and the European Union slapping sanctions on Moscow.

Since then, rights groups say those who opposed the annexation have faced a crackdown.

Human Rights Watch on Friday accused the authorities of creating "a pervasive climate of fear and repression in Crimea" in the two years since annexation.

The group deplored abuses perpetrated against the Crimea Tatar community, a minority Muslim group that opposed the Russian annexation, as well as a crackdown on pro-Ukraine activists and journalists.

The West continues to condemn the annexation, vowing to keep sanctions in place as long as Crimea remains under Russian control.

The US State Department on Wednesday called on Russia to "end that occupation and return Crimea to Ukraine" -- a prospect Russian authorities have repeatedly rejected.