Apart from the referendum context, the show of military might and engineering expertise also came at a time of financial uncertainty. 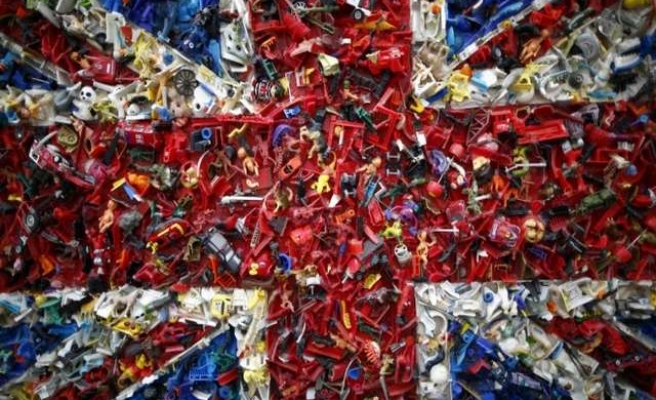 A crowd of 4,000 gathered in this Scottish port to watch pipe bands and dancers perform before the monarch pressed a button to smash a bottle of Scotch whisky against the hull of the HMS Queen Elizabeth, the first of two new aircraft carriers worth 6.2 billion pounds ($10.6 billion).

British Prime Minister David Cameron was in the audience along with Scottish First Minister Alex Salmond, a champion of independence in the Sept. 18 vote, and stressed the links between Scotland and the rest of the United Kingdom.

"HMS Queen Elizabeth is the flagship of our nation's maritime ambition," Cameron said in a statement released by his office. "She is an investment in the future of British security, British prosperity and our country's place in the world."

Britain's defence sector employs more than 12,600 people in Scotland, according to government figures, with around 4,000 jobs directly linked to the aircraft carriers project.

The Union flag flew prominently from the 65,000 tonne ship's mast, while a Royal Marine Band played the British national anthem twice during the 90 minute-long ceremony.

Apart from the referendum context, the show of military might and engineering expertise also came at a time of financial uncertainty. It is not clear if the identical second vessel, which is already being built, will join the Royal Navy's fleet.

The government won't decide its future until a defence spending review in the second half of next year. Defence experts say it could still be mothballed or sold.

Nor is it known how many U.S.-built F-35 jets it will carry. The carrier project is already 2.6 billion pounds over the original budget set out seven years ago.

The original plan was to buy 138 F-35s, but so far London has only committed to 48 and bought just three for training.

The U.S. military on Thursday said it had grounded its entire fleet of F-35 jets pending engine inspections after a fire last month on an Air Force F-35A jet.

Even though it has made cuts, Britain remains the world's fourth biggest military spender and Cameron says an independent Scotland would struggle to match Britain's armed forces.

Britain has cut defence spending by around 8 percent over the last four years as part of a government plan to reduce a record budget deficit, leaving it with an army which by 2020 will be its smallest since the Napoleonic Wars of the early nineteenth century. The Royal Navy has also been hard hit.

While Britain was one of only four NATO partners to meet their agreed target of spending 2 percent of GDP on defence last year, both U.S. and British military officials have said spending cuts could affect its ability to fight wars.

With a deck the size of three football pitches and a belly that can fit a mix of about 40 jets or helicopters inside, HMS Queen Elizabeth is meant to be a gamechanger.

Analysts say the $10.6 billion bill for the pair built by the Aircraft Carrier Alliance - a consortium including British engineering companies BAE Systems and Babcock, and the UK division of France's Thales - is good value in comparison to the U.S., which spent an estimated $12.9 billion on its new carrier.

The decision about the second ship, HMS Prince of Wales, will be made by a new government elected in a vote in May 2015.

Britain's economy is improving but the defence budget is likely to remain under pressure for some time.