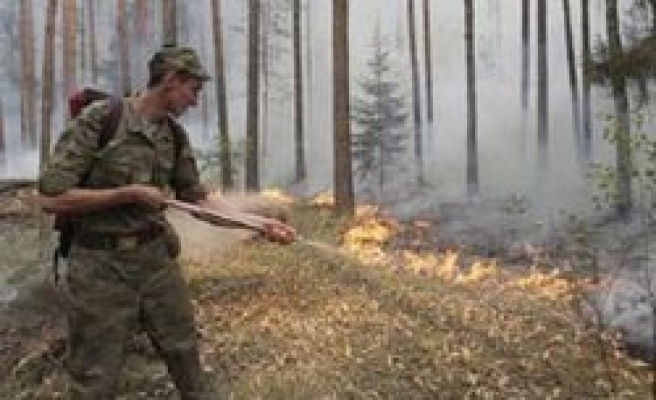 Fears that fires scorching forests near Chernobyl may reawaken dangerous amounts of radioactive fallout and propel it into the air are overblown, scientists say, and the actual health risks are very small.

Even firefighters tackling the blazes, which officials say have hit forests in Russia's Bryansk region polluted by radioactive dust from the 1986 Chernobyl reactor disaster, are unlikely to run any added nuclear contamination risks.

The amount of radiation in smoke would be only a fraction of the original fallout, they say.

"Of the total radioactivity in the area, much less than one percent of it will be remobilised," said Jim Smith, an expert on Chernobyl and a specialist in Earth and Environmental Sciences at Britain's University of Portsmouth.

Radioactive contamination in the area has substantially diminished in the almost two and a half decades since explosions at Chernobyl's reactor No. 4 caused the world's worst civil nuclear disaster on April 26, 1986.

"Most of the radioactivity is in the soil, which will not be affected by the fires, and only a small proportion is in the vegetation," Smith said in a telephone interview. "And of that only a very small proportion of that will get re-suspended in the smoke from the fires."

Russia's forest protection agency said on Wednesday that fires covering an area of 39 square kilometres (15 square miles) had been registered in regions with forests polluted with radiation. The regions affected included Bryansk province, which borders Ukraine, southwest of Moscow.

"The fires do not have any radiological consequence for the rest of Europe and Germany since the dispersion of the radioactive substances is regionally limited," the German organisation said on its website.

According to experts, the types of radioactive isotopes that might still be active in the Bryansk area include strontium 90 and caesium 137. These substances have half lives of about 30 years, meaning that only about half the radioactive material emitted by Chernobyl is still around now.

"Even though the contaminated territories are affected by the fires in Russia, the situation would not lead to health concerns for the population, locally and in other countries in Europe," said France's Institute for Radiation Protection.

It said there may be a slight increase in radioactivity in the nearby environment due to re-suspension of caesium-137, "but it would be very much lower than the natural radioactivity."

Portsmouth's Smith and Stig Husin, an analyst in emergency preparedness at the Swedish Radiation Safety Authority, said the main threat from the fires both locally and nationally in Russia was the choking smoke from forest and peat fires, and the smog which is clouding the air in Moscow -- all of which can cause lung and heart problems. "I would be much more concerned about the smog in Moscow and the health impacts of that -- not because of radiation but because of people inhaling harmful air pollution," said Smith.

Husin said those living near the Chernobyl-contaminated areas where fires have been reported would be wise to protect themselves by staying inside or wearing masks.