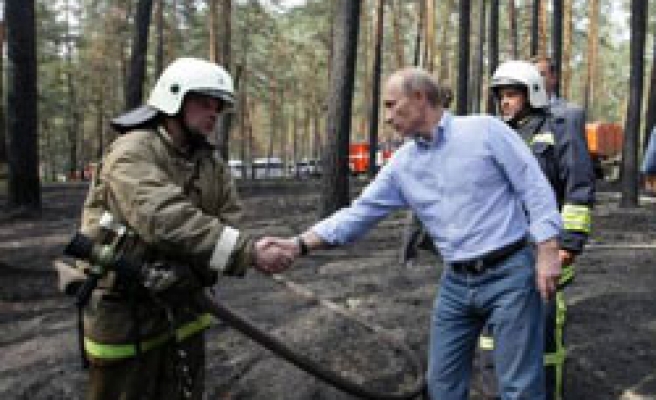 The death toll from Russia's most deadly wildfires in almost four decades rose to 48 on Wednesday as fires raged across areas equal in total to Greater London, blanketing Moscow in acrid smoke.

Prime Minister Vladimir Putin declared the situation as "tense and dangerous", while President Dmitry Medvedev cut short his summer stay in the Black Sea resort of Sochi for a special meeting in Moscow of Russia's Security Council on the fires.

The fires have swept through Russia's tinder-dry forests in the hottest summer since records began 130 years ago, leaving thousands homeless and prompting Russia's leaders to declare a state of emergency in seven of the worst hit regions.

Critics charge that the government has been slow and ineffective in responding to the fires.

They say changes to Russia's Forest Code pushed through parliament by the Kremlin in 2006 seriously weakened fire defences in the country's vast forests, the world's biggest.

Prime Minister Vladimir Putin visited firefighters in the southern region of Voronezh, one of the worst hit. "The situation with forest fires in the country has on the whole stabilised but remains tense and dangerous," Putin told a meeting of officials.

Russia has 170,000 people including troops battling the spreading forest fires, and at least 520 fires were raging on Wednesday over an area of 1,885 square km, according to the Emergencies Ministry.

The wildfires are Russia's deadliest since 1972, when at least 104 people died in Moscow region alone, according to the Emergencies Ministry. In 1972, forest and peat fires raged over an area of 100,000 square km of the then Soviet Union.

A record heatwave has engulfed central parts of European Russia since mid June, ruining much of the wheat crop in some areas and raising fears that a poor harvest in the world's third largest wheat exporter could push up global food prices.

Moscow, a city of 10.5 million, was shrouded in acrid smoke from forest and peat fires, pushing air quality to the most dangerous levels since the capital was last wrapped in smoke eight years ago.

"The pollution is at the worst level since 2002 and is approaching those levels," Alexei Popikov, an expert on air quality at Moscow's state pollution monitoring agency, told Reuters.

Current levels of carbon monoxide in Moscow soared to about 5.7 times safe levels overnight and Russia's top lung doctor has warned residents are inhaling the equivalent of 40 cigarettes every few hours.

People living in the city complained of waking in the morning with headaches and sore throats. Shops throughout the city have rung out of fans and some residents have taken to using masks over their mouths in the street.

The forest fires and scorching temperatures have complicated operations for Russia's large and ageing nuclear sector.

A reactor at the Novovoronezh atomic power station was shut down on Wednesday because transformers broke due to high air temperatures. Other reactors at the station were working normally, state nuclear corporation Rosatom said.

More than 2,100 firefighters battling fires near a nuclear research centre at Sarov in Nizhny Novgorod province, around 350 km (220 miles) east of Moscow, reported progress. They said they had managed to divide up the fires.

The Sarov facility, where the first Soviet atom and hydrogen bombs were designed, was a top-secret location in Soviet times codenamed Arzamas-16.

Putin, Russia's most popular politician, has promised that the state will help rebuild all those homes destroyed by the fires and has ordered officials to install video cameras at the building sites to monitor progress.