The Federal Prosecutor's Office said the group's main aim appeared to be to undermine Germany's political system, adding: "It is suspected they wanted to carry out terrorist acts of violence to this end." 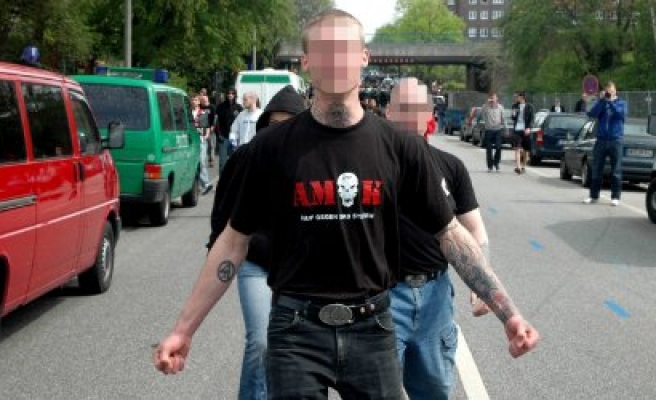 Police raided premises in Germany, Switzerland and the Netherlands on Wednesday seeking evidence of planned attacks by a far-right group calling itself the "Werewolf Squad", German prosecutors said.

The Spiegel Online website said the group was suspected of planning bomb attacks and had modelled itself on the "Werewolf" commandos whom the Nazis planned to send behind enemy lines towards the end of World War Two.

The Federal Prosecutor's Office said the group's main aim appeared to be to undermine Germany's political system, adding: "It is suspected they wanted to carry out terrorist acts of violence to this end."

German authorities are under pressure to step up their response to far-right threats after the chance discovery in 2011 of a neo-Nazi cell, the National Socialist Underground (NSU), suspected of murdering eight Turks, a Greek and a German policewoman between 2000 and 2007.

The group's last surviving member is now on trial, and the case has triggered accusations that, despite Germany's traumatic Nazi past, police and especially the domestic intelligence agency are blind to far-right militancy.

In Wednesday's raids, instigated by Germany, some 50 officers searched flats and offices in the northern states of Lower Saxony, Mecklenburg-Vorpommern and Hamburg, while Swiss police searched the prison cells of two suspects.

A spokesman for German prosecutors said investigations into the group had started last year. He said no one had been detained, although Dutch police said one arrest was made near The Hague.

Police confiscated computers, memory cards and documents in the apartments and offices of four individuals in the three countries, but the spokesman said no concrete evidence of an attack plan had been found so far. The prosecutor's office said the group appeared to have developed an electronic encryption programme.

Although the far-right is politically weak in Germany, experts have long warned of the threat of violence from groups of radicals, inspired by Hitler, who recruit disillusioned, often jobless, youths across Germany, especially in the former communist East.

Anetta Kahane, head of the pro-democracy Amadeu Antonio Foundation, said she was not surprised at the discovery of another group.

"It is clear that the NSU is not the only far-right group capable of violence. They are organised, they have no problem getting weapons and they are a permanent danger," she said.

"To root them out, there still needs to be a change in culture in the German establishment, and real determination," she said.