Many then said that Akhmetov - ever the prudent businessman - was cautiously weighing the shifting sands in a volatile situation that had caught him and others by surprise. 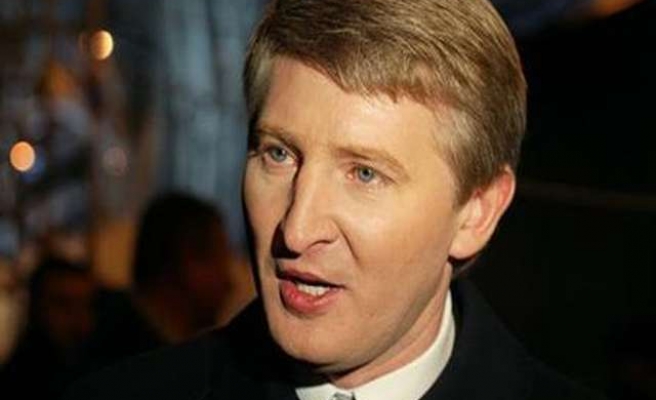 The clanging of repairs to tanks and heavy armoured vehicles rings out from a factory in eastern Ukraine that is owned by the country's richest man but was taken over by pro-Russian rebels.

Rinat Akhmetov's Corum company says it has nothing to do with the current work at the factory, where captured army vehicles are re-marked and men fix tank tracks, clean cannons and apply extra layers of armour.

The steel and energy multi-billionaire is, as always, saying little but showing signs of positioning himself for all possible outcomes to the separatist conflict in which several thousand people have been killed and Western sanctions slapped on Russia.

With a parliamentary election taking place in Ukraine on Sunday and parts of his business empire threatened as the rebels toy with the idea of nationalisation, it is a delicate balancing act.

When the separatists first occupied public buildings in Donetsk, the 48-year-old businessman, whose fortune from metals, energy, banks and communications has a net worth put by the Forbes magazine at $11.7 billion, remained silent.

Many then said that Akhmetov - ever the prudent businessman - was cautiously weighing the shifting sands in a volatile situation that had caught him and others by surprise.

After fighting flared between the rebels and Ukrainian troops and Russian involvement on the rebel side grew, Akhmetov, a former close confidant of the pro-Russian president ousted by protests in Kiev, came out in favour of a united Ukraine.

He has stuck to that public position since and statements by System Capital Management, which manages his global empire, focus on his commitment to looking after his more than 300,000-member workforce and paying taxes to the state.

But a statement last week by the top separatist leader Alexander Zakharchenko, who suggested nationalising some enterprises in the Donetsk region, must be sounding alarm bells.

The heavy-machine factory may be the only part of the Akhmetov empire directly controlled by the separatists. But much of his other business sits on rebel-held territory, including several industrial plants, a huge steel rolling mill, a handful of coal mines, banking and communications assets and prestige structures like the space-age Euro-2012 Donbass Arena football stadium.

He has moved some of his business operations into government-controlled territory, while some others go on working as best they can on rebel-held land.

"Akhmetov has one single strategy and that is to survive - to survive and preserve even if it is only a part (of his empire)," said Volodymyr Fesenko of the Penta political research institute in Kiev.

Donetsk, an industrial hub with a pre-war population of about one million, is now the main stronghold of the rebels fighting to split east Ukraine from Kiev and tie it to Russia.

Moscow has sided with the separatists but denies it is a party to the conflict. Moscow dismisses charges by Kiev and the West that it has sent in troops and weapons to support the rebels despite growing evidence to the contrary.

Donetsk has seen prolonged fighting, including fierce artillery battles on its outskirts, despite a Sept. 5 ceasefire agreed between the Kiev government and the rebels.

That ensures plenty of work for the workers in Akhmetov's Donetskgormash heavy machine factory, turned into military repair workshop by the rebels in August. Corum said it had paused operations due to fighting before the factory was seized.

"Currently, the Corum company does not control the production facility in Donetsk and, accordingly, has nothing to do with actions undertaken there," it said in a statement.

The people now in charge declined to be named, saying their role was too sensitive. On the factory floor, workers covered with dark green paint two white stripes on some combat vehicles, a field marking often used by Ukrainian government forces.

They said a lack of spare parts was their main headache, forcing them to bring in even badly damaged and burned-out vehicles they call their "donors" in the hope of recovering something useful.

"Sometimes we get one and the same vehicle three or four times. That especially tends to happen after intense battles at the airport," said one man who oversees the work, referring to prolonged fighting at Donetsk city airport despite the truce.

"So we fix them again and off they go," he said.

His work register, printed on several pieces of paper, lists 57 armoured vehicles of various types and another 19 cannons that have gone through the plant since mid-August.

Many of the workers were employed at the factory before the conflict began, the people running the plant said. They said the workers now receive only food rations.

Akhmetov's background as a powerful mogul who emerged victorious from vicious power struggles and a carve-up of assets in the industrial east in the 1990s, as well as his long friendship with the now disgraced, Moscow-allied Ukrainian leader Viktor Yanukovich, mean many question his integrity.

Akhmetov was one of the last people whom Yanukovich saw before fleeing to Russia last February. Insiders say the tycoon then advised Yanukovich to resign as president, though he refused and fled across the border.

Despite coming out for a united Ukraine he has not done as much for the government cause as, say, fellow-oligarch, banking tycoon Igor Kolomoisky, who has funded volunteer forces to fight the separatists.

Akhmetov did try unsuccessfully to negotiate between Kiev and the separatists early on and, when this failed, he organised a public show of condemnation of the separatists' action in his factories.

He also sent workers from his Metinvest group to support government patrols in the port-city of Mariupol.

Now the leadership of the separatists' self-proclaimed Donetsk People's Republic (DNR) wants Akhmetov to register his business operating on the territory they control and start paying taxes to their budget, rather than the Ukrainian one. That would help their quest to separate from Kiev.

Asked whether SCM would register anew, a spokesman, Jock Mendoza-Wilson, said: "We have continued to pay salaries to our employees and to help create stability and to protect jobs and communities. As regards taxes, SCM operates exclusively within the legal framework and the laws of Ukraine. This includes the payment of taxes to both the local and national budgets."

The turmoil has affected Akhmetov's assets, forcing the closure of mines and heavy-industry facilities, damaging property hit by shelling and undermining the wider chain of economic ties in the region.

His Metinvest,, Ukraine's largest steelmaker, said in August it was not accepting new orders as the crisis forced it to cut output.

The company's first-half revenue fell 8 percent year on year to $6.02 billion and the chief financial officer said Metinvest would lose several hundred million dollars of income in the second half because of the conflict.

Many low-ranking rebels in Donetsk are scornful of the magnate whom they see as a traitor for not providing them with the help they had sought.

The separatist leadership, however, has taken a more nuanced approach and avoided voicing strong accusations against him in public in a bid not to antagonise the billionaire.

When an aggressive crowd in May rallied outside Akhmetov's Donetsk residence hidden by a solid beige fence, a heavily armed separatists' militia called Oplot prevented the protesters from entering the premises.

But Zakharchenko, the DNR's current "prime minister" as well as head of Oplot, has also threatened with a stick as he is looking for a deal with Akhmetov. He said last week his men have taken three industrial facilities under their "temporary management", including two sites owned by Akhmetov.

Akhmetov bankrolled Yanukovich's campaign when the latter ran successfully for president in 2010 and - with an eye still to keeping onside with local support in the east - he is visibly supporting the Opposition Bloc of Yanukovich's former Fuel Minister Yury Boiko in Sunday's election.

But, ever the survivor, commentators say he is also likely to be funding several other parties and candidates in individual constituencies to "spread his bets" for the future and ensure he has lines of communication with the pro-Western leadership expected to emerge from Sunday's election.

"His tactics are various. But the elements of these tactics are aimed at getting his people into parliament to try to reach an accommodation with (Ukrainian President) Petro Poroshenko and (Prime Minister) Arseny Yatseniuk," Fesenko of Penta said.