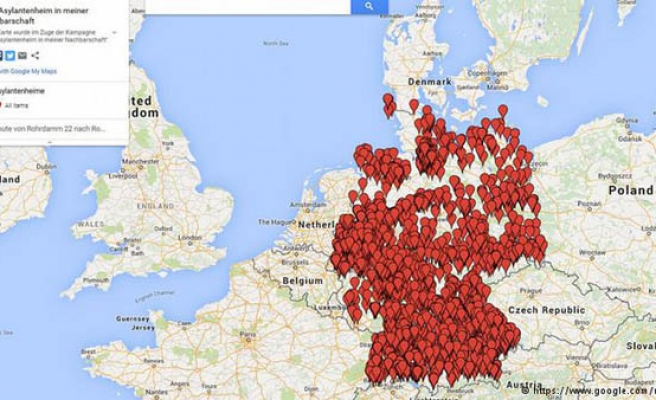 Activists fear a map that has appeared on line was apparently created by a neo-Nazi group and shows the locations of refugee homes and shelters across Germany could possibly be used a tool that can lead to more attacks against asylum seekers.

Every red dot that is on map represents a shelter for asylum seekers - and there are red dots all over Germany.

The title of the map translates roughly to "No refugee centre in my backyard" and it gives the impression that is is virtually no space left in Germany that isn't already home to an asylum center or refugee shelter. The place of the dots on the map make no differntiation as to whether  an address houses a single refugee or over a hundred.

Clicking on the dot offers more information - most of the time it appears to be a complete address with a street name and number. In some instances the extra information spells out how many refugees currently live at a shelter or details how many people will reside at a center currently under construction. The former British military base in Niederkrüchten, for example, is expected to house "up to 1,000 asylum seekers," the map said.

In some case it points out how refugees are "taking over" - a former medical centre will be transformed into a home for asylum seekers.

According to an article in Deutsche Welle, the creators of the map, which used Google Map service, have sought assistance from members of the public in assiting to help fill in details about the refugee homes' locations and sizes from people willing to send addresses to an email address that appears to be affiliated with German neo-Nazi group "The Third Way." The group has published guidelines with the same title as the map and gives detailed information on how to prevent shelters being available for asylum seekers.

The group also provides a how to guide in organizing anti-asylum demonstrations, mobilize people against the construction of refugee accommodation and put pressure on local politicians so that the shelters are not built to avoid what the group calls the "flood of asylum seekers."

Activists have called on Google to delete the map, arguing that it stirs up hate and promotes violence against asylum seekers. Google has launched an investigation with spokesperson  Lena Heuermann telling DW: "MyMaps is a neutral platform that [people] can use to publish geographical information. We will of course remove every map that violates our guidelines and we are currently reviewing if that is the case."

The map does not explicitly ask people to attack refugee homes and shelters. However it says it wants to prevent abuse of German asylum laws by people who do not require legal protection. Text accompanying the map says that just 2 percent of asylum requests are approved by German authorities.