'I can definitely say that my life is ruined. It's unlikely that I will be able to find a job and do what I like the most,' Petra Laszlo says 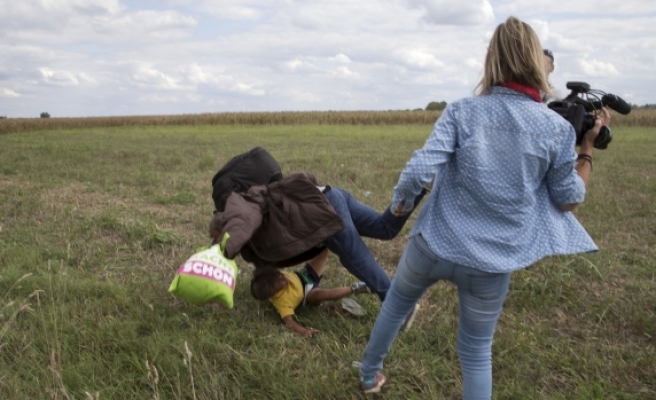 A Hungarian camerawoman, who lost her job after assaulting refugees in September, is going to sue Facebook for fueling hate and bias towards her. Moreover, she is considering to move to Russia.

Hungarian N1TV's Petra Laszlo was caught on camera on Hungary-Serbia border while kicking refugee girl and then tripping a refugee with a child in his hands. Later she apologized, saying she only did that because she was afraid.

In her recent interview, Laszlo clarified that she was only “trying to help police,” as the refugee had not obeyed orders.

"I pushed him only because I was afraid. I did not see that there was a child. I’m sorry that it turned out this way," she told the paper.

Laszlo says her life has never been the same since the incident. She has been dubbed a "heartless, racist, children-kicking camerawoman," fired from her job, and threated by haters following the scandal.

"I can definitely say that my life is ruined. It's unlikely that I will be able to find a job and do what I like the most," she told the paper.

The camerawoman said that at least 10 fake "Petra Laszlo" accounts containing improper contents have appeared on Facebook and some people have offered some $20,000 for her murder via these groups.

One such group still exists under the name "Petra Laszlo," which boasts more than 10,000 likes on Facebook.

Laszlo told Izvestia that she asked Facebook's management to delete these groups, but claims her letters and complaints to Facebook have been left unattended and that, instead, the social network has intentionally deleted groups supporting her.

She told the paper she plans to sue Facebook for its prejudice. According to the paper, she also wants to prove that the asylum seeker she tripped had been untruthful, because the man has changed his testimony in court. She said that he had initially blamed a police officer for the incident, but later began accusing her.

"Once the court is over, we're going to move to another country," said Petra Laszlo, mentioning Russia as a likely destination for immigration.

"We consider starting to learn Russian. It is important for us to leave Hungary. We'll make the decision once the trial is over," she said.