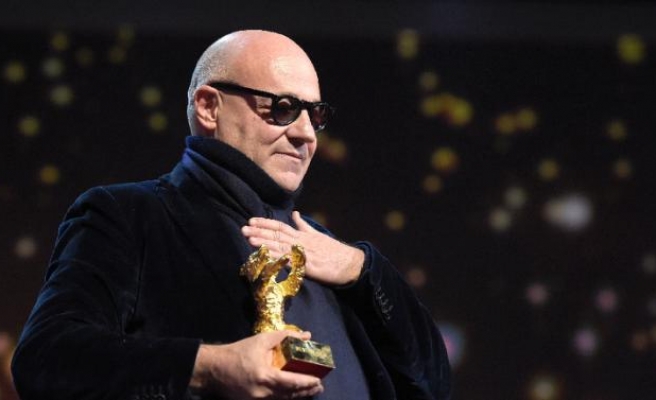 Italian director Gianfranco Rosi's picture offers an unflinching look at life on the Mediterranean island of Lampedusa, where thousands of migrants have arrived trying to reach the European Union over the last two decades and thousands more have died trying.

The Eritrean-born Rosi dedicated the prize to the people of Lampedusa "who open their hearts to other peoples".

"I hope to bring awareness," he said as he accepted the golden trophy from Streep.

"It is not acceptable that people die crossing the sea trying to escape from tragedies."

Huppert wowed audiences with her dignified, soulful turn in "Things to Come" as a philosophy teacher whose marriage falls apart just as her elderly mother dies.

Tunisia's Majd Mastoura won the Silver Bear for best actor for his role in "Hedi", a love story set in the aftermath of the Arab Spring, which also won best debut feature.

"I hope we will continue on being free, being happy, producing good art."

The Silver Bear for best actress went to Denmark's Trine Dyrholm for her role as a wronged wife in Thomas Vinterberg's "The Commune", a semi-autobiographical movie about his 1970s childhood.

Oscar-winning Bosnian director Danis Tanovic accepted the runner-up Grand Jury Prize for "Death in Sarajevo" about the corrosive legacy of the Balkans wars.

A more than eight-hour-long historical epic by Filipino director Lav Diaz, "A Lullaby to the Sorrowful Mystery", claimed the Alfred Bauer Prize for a feature film that opens new perspectives in cinema.

Best screenplay went to Polish filmmaker Tomasz Wasilewski for his portrait of the pivotal 1989-90 period in his country as told through four women, played by some of Poland's best-known theatre actresses, at crossroads in their lives.