Denmark has closed a major motorway and all rail links, including connecting border trains in a bid to stem the flow of refugees from Syria. 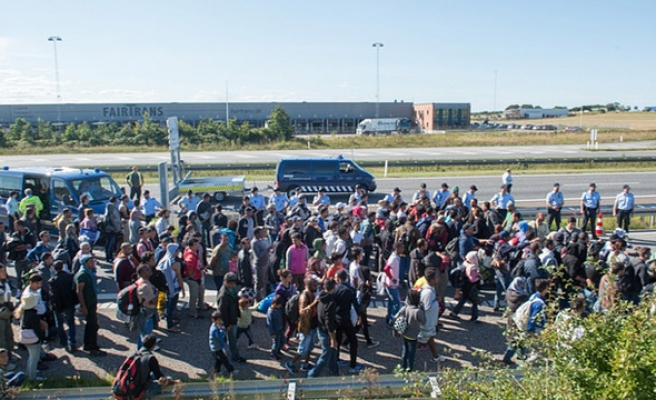 Danish police have closed a motorway and rail links with Germany in order to  prevent refugees heading north to Sweden, which has more generous asylum rules than Denmark, as the crisis facing Europe spreads northwards according to a report in the The Guardian.

The E45 motorway, a vital passage of traffic for people and goods between Sweden and Germany, was closed on Wednesday as roughly 300 refugees, including children, began walking on it.

Police made efforts to urge the refugees without using force “We are trying to talk to them and tell them that it is a really bad idea to walk on the motorway,” a police spokeswoman said.

Police have also requested from the state-owned railway operator to stop all trains between Germany and Denmark until further notice. Services were expected to resume at some point on Thursday.

Denmark is part of the EU’s Schengen zone, where borders are meant to be open to allow free movement. When asked whether blocking the road and rail links meant breaking with the Schengen system, a police spokesman said he did not think so as he expected traffic to start moving again soon, although he could not say when.

Refugees on board two trains in Rodby, stopped by police, refused to disembark. Rodby is the point where train ferries arrive in Denmark from Germany. About 100 foreign passengers left a train that was still on a ferry and were transferred to a school for registration.

“We know that many of them want to go to Sweden, but naturally we cannot let that happen,” police spokesman Carsten Andersen said. “So right now, we have asked them to start a dialogue. We are waiting patiently for some of them to agree to that and stick their heads out of the trains.”