Refugees rush to Greek camp on rumours border will open

About 250 people of all ages gather by the railway tracks and the border fence, singing and shouting slogans in a largely peaceful demonstration watched by Greek police in riot gear 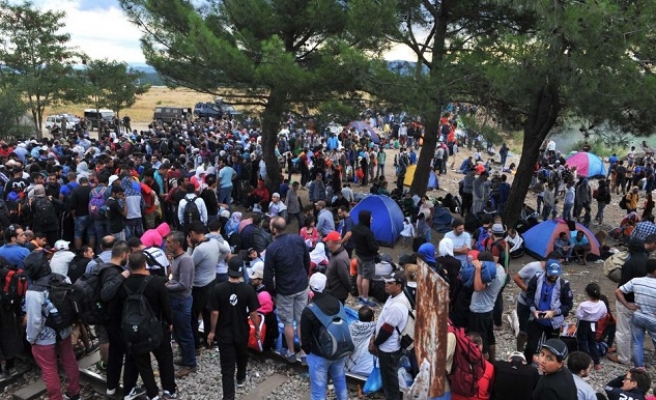 Dozens of hopeful refugees, some carrying babies, rushed to Greece's overwhelmed Idomeni camp on the sealed border with Macedonia on Sunday following rumours that the frontier would be forced open.

The influx came as Greek authorities were trying to evacuate an estimated 11,500 people already stranded at the squalid camp after Balkan states slammed shut their borders, cutting off the refugee route to the European Union.

About 250 people of all ages gathered by the railway tracks and the border fence, singing and shouting slogans, an AFP correspondent said, in a largely peaceful demonstration watched by Greek police in riot gear.

Many elderly handicapped refugees were sitting in wheelchairs sobbing while many other people, who had dismantled their tents in order to be ready to cross the border quickly, were waving white handkerchiefs.

"No violence, we just want to cross," read one banner, while another said: "Freedom of movement is everybody's right."

Some in the crowd, however, attempted to move towards the police line but were blocked by others who formed a human chain, the AFP correspondent said.

Arguments erupted, with Syrians and Iraqis accusing the Afghans and Pakistanis of wanting to push their way through, the journalist said.

The wave of new arrivals appeared to be triggered by a rumour that journalists and Red Cross officials would help them force their way across the fence into Macedonia, a young Syrian refugee told the Athens News Agency (ANA).

"We heard today that the border will open and we came here to cross," he said.

"They told us the Red Cross and 500 journalists from all over the world will be with us," he said, without specifying the source.

Another young Syrian said his sister, who is living in Germany, had seen the same claim on the Internet and alerted him.

"People have been here for a long time. I think it's very dangerous to cross, especially for the children but what should we do?" 24-year-old Qasim Mosawy from Afghanistan told AFP.

Dozens of other refugees could be seen heading through the fields, carrying babies, towards the Idomeni crossing.

"We are trying to step up our information campaign to the refugees. Some people, for reasons we don't understand, are creating false hope," said Giorgos Kyritsis, spokesman for the SOMP agency which is coordinating Athens' response to the refugee crisis.

Using loudspeakers, Greek officials told those gathering that the crossing would remain closed, repeating the message in both Arabic and Farsi, ANA said.

Two weeks ago, hundreds of people were stopped by Macedonian troops after crossing a surging river on the border. Bypassing the regular crossing, they tried to wade through the fast-flowing water, clinging to a rope strung between the banks.

Three Afghans, including a pregnant woman, drowned. The rest were stopped by Macedonian troops and sent back to Greece.

"Macedonia will not allow (the) reopening of the Balkan route," Ivica Bocevski, a representative of Macedonian President Gjorge Ivanov, said in the wake of the incident.

The bottleneck has left around 50,000 refugees stranded across Greece, which has stepped efforts to evacuate Idomeni.

On Friday and Saturday, 11 buses transported around 600 refugees from Idomeni to other camps in northern Greece.

Those persuaded to board the first buses were mainly parents with children who can no longer tolerate the difficult conditions there.

But others are holding out at Idomeni.

"People who have no hope or no money, maybe they will go," said 40-year-old Iraqi Fatema Ahmed, who has a 13-year-old son in Germany and three daughters with her in the camp.

"But I have hope, maybe something better will happen tomorrow."