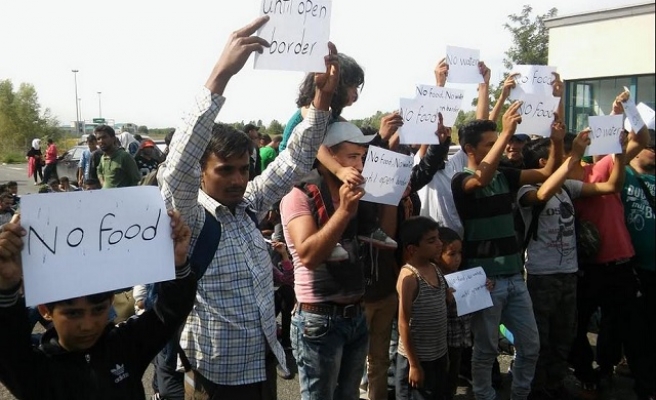 Refugees stuck on the Hungarian-Serbian border have declared a sit-down hunger strike Tuesday, demanding to be allowed to proceed further into the EU, according to Russia Today. Newly declared hunger strikers are reportedly holding banners, saying "No food no water until open border."

Earlier on Tuesday, main official border crossing point between Serbia and Hungary was closed to refugees by the Hungarian authorities.

Hundreds of migrants and refugees have pressed against the barrier demanding to cross the border and enter Hungary. Banging on the metal barrier, they shouted "open border, open border!" Police stood by on the other side.

Many of the asylum seekers are sitting on the main highway from Serbia to Hungary.

"I will sit here until they open the border. I cannot go back to Syria. Life in Syria is finished," a Kurd from Syria said.

Budapest announced it will reject refugees illegally entering the country from neighboring Serbia.

"Certainly, as that is the international legal rule, therefore it must be done that way," said government spokesman Zoltan Kovacs.